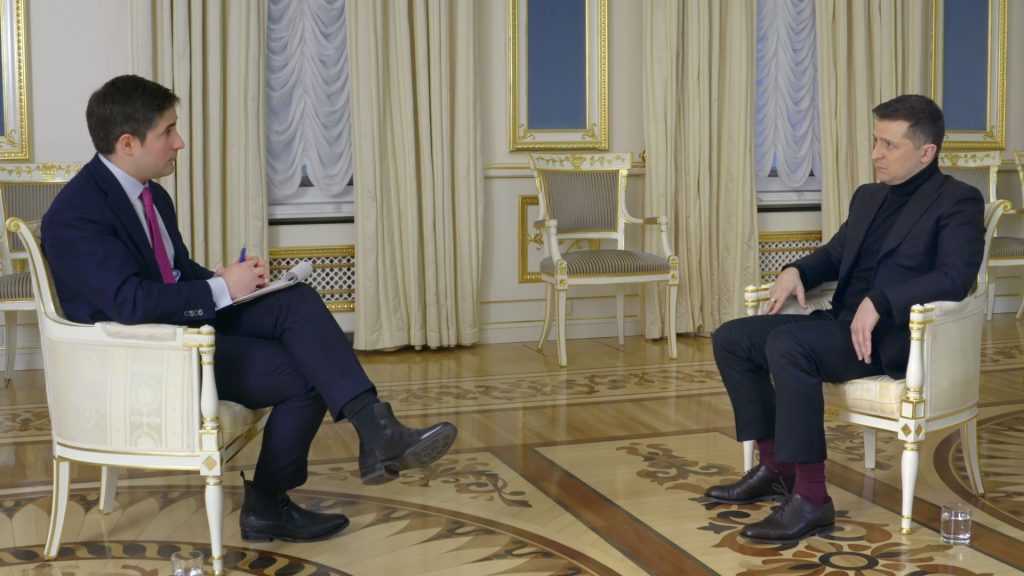 Ukrainian President Volodymyr Zelenskyy’s latest high-profile international interview has raised a number of concerns back home in Ukraine. In an episode of Axios on HBO that aired on January 31, Zelenskyy spoke with correspondent Jonathan Swan about everything from the recent storming of the US Capitol in Washington DC, to Ukraine’s Euro-Atlantic integration ambitions. The tone and content of Zelenskyy’s comments left many questioning the quality of his preparation and unsure about his views on some of the key events in modern Ukrainian history.

One of the main topics discussed during the interview was Ukraine’s relationship with the United States and Zelenskyy’s expectations for the incoming Biden administration. When asked what he would like to say to President Biden, Zelenskyy responded by claiming he would ask, “Mr. President, why are we still not in NATO?”

This could be viewed as a legitimate question in the context of Ukraine’s well-publicized NATO membership aspirations, which since 2019 have been enshrined in the Ukrainian Constitution. However, it also risked sounding both undiplomatic and premature.

There was an air of exasperation about the tone employed by Zelenskyy that is not justified by the realities of Ukraine’s substantial but nevertheless incomplete progress towards NATO integration. The Ukrainian parliament and the Ukrainian military continue to pursue the institutional reforms necessary to join the alliance, but many more steps are still required before Ukraine would be in a position to become a NATO member state. With this in mind, Zelenskyy might have been better off focusing on expressing his hopes for enhanced cooperation with the new Biden administration, while also underlining his personal commitment to Ukraine’s further NATO integration.

The Ukrainian leader’s comments on the January storming of the US Capitol represented perhaps the most troubling segment of the entire interview. While most observers have characterized the events of January 6 in Washington DC as anything from an insurrection to a terrorist attack, Zelenskyy appeared to draw direct parallels with Ukraine’s two pro-democracy post-Soviet revolutions.

This comparison runs counter to the accepted understanding of Ukraine’s 2004 Orange Revolution and the country’s 2013-14 Revolution of Dignity. In both cases, Ukrainians took to the streets motivated by a desire to defend the rule of law and other core democratic values. In contrast, the storming of the Capitol has rightly been called an attack on democracy.

While Ukraine’s post-Soviet revolutions sought to safeguard basic human rights against an increasingly authoritarian government, those engaged in the recent storming of the Capitol were in essence supporting the existing authorities in a bid to overturn the results of a democratically held election. They were also to a large degree inspired by conspiracy theories. It is impossible not to notice the stark differences between these events.

Zelenskyy’s observations on the storming of the Capital went beyond ill-judged comparisons with Ukraine’s post-Soviet revolutions. He also voiced the opinion that the incident called into question America’s international credentials as a leading democratic nation. “After something like this, I believe it would be very difficult for the world to see the United States as a symbol of democracy,” he commented.

The Ukrainian leader is far from alone in drawing such conclusions. Indeed, numerous American commentators have made similar points. Nevertheless, many would question whether Zelenskyy should be making such sweeping statements at a time when US support remains essential for the continued development of Ukraine’s own fledgling democratic institutions.

Zelenskyy’s disparaging comments on American democracy could also be construed as unwelcome interference in domestic US affairs. Ukraine has already had more than enough experience of such claims in recent years, and should be doing everything possible to avoid any repetitions.

There is still hope that Zelenskyy’s sometimes awkward statements to the international media are the result of language barriers and a general lack of experience. Certainly this is preferable to the notion that his mistakes are deliberate. As long as members of Zelenskyy’s inner circle continue to be suspected of Russian sympathies, doubts will remain over the true intent of comments made by the president that place a strain on Ukraine’s ties with the country’s Western partners.