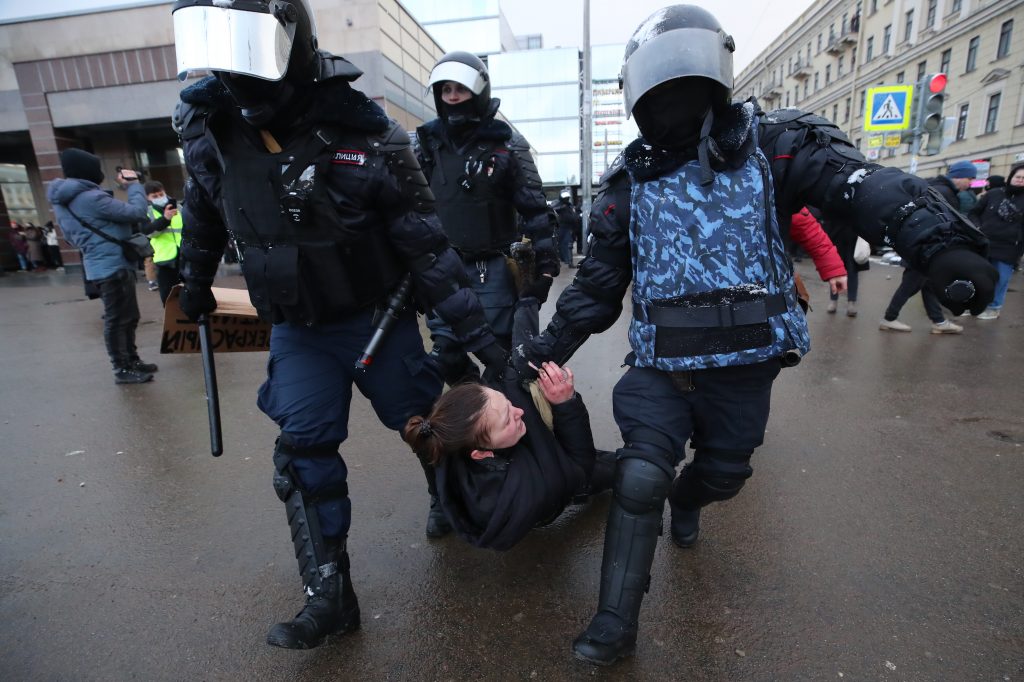 The protest video presents us with a pair of polite and brave young women bundled up in winter clothing. Out of their backpack, they carefully and shyly extract the red and white flag of the interwar Republic of Belarus, which has in recent months become the symbol of popular resistance to the Lukashenka dictatorship. For several moments, they hold the flag up between them and smile at a friend brandishing a camera. Suddenly riot police appear out of the corner of the frame. They brusquely pounce, grabbing the young women by the arm and hurrying them off to a police van to be detained, harassed, and perhaps worse.

We have been observing endless variations on this scene in Belarus for almost six months now, ever since a democratic uprising began in the wake of a rigged August 2020 presidential election. Except on this occasion not everything is as it seems. The young women in the video are Russians and the renegade Belarusian flag is being confiscated by Russian riot police during a January 2021 demonstration in Moscow.

Weekly demonstrations and acts of political resistance have been a feature of quotidian life in Belarus since summer 2020, and they have have continued into the new year. Yet on January 31, the protest slogan “free Belarus” could be heard in Moscow and St. Petersburg as well Minsk and Brest.

The sharing of flags and the borrowing of chants reflect the remarkable congruence of two post-Soviet opposition movements which more and more seem to resemble one another. The last weekend in January saw the second round of nationwide political demonstrations take place across Russia in response to the recent jailing of Russian opposition leader and anti-corruption activist Alexei Navalny. In a variety of ways, Russian political activists and demonstrators appear to have taken inspiration from the courage and tactics they have observed across the border in Belarus.

The similarities between the two protest movements go beyond the protesters themselves. The heavy-handed reaction of the Russian security forces also closely resembles the approach favored by the Lukashenka regime.

According to the Associated Press, over 5,100 people were arrested at protest actions across Russia on January 31. This represents a significant increase on the approximately 4,000 people detained during the previous weekend’s rallies. These are unprecedented numbers, even by the uncompromising standards of Putin’s Russia. The size of the rallies has also been striking. Opposition demonstrations in Russia have not been able to garner such crowds for almost a decade.

Following the Belarusian example, the Russian police have initiated the indiscriminate arresting of journalists (PEN reported that 80 Russian journalists had been detained on January 31). Their credentials and yellow vests appear to have made no difference whatsoever.

Video and photographic evidence from Sunday’s rallies points to an increase in the levels of violence used against protesters, with footage of disturbing incidents recorded across Russia. Men who did not appear to be offering any resistance were tasered and brought to paddy wagons in a semi-conscious state. Other protesters were beaten with truncheons as nearby females pleaded for mercy. Police officers in one small town allegedly threatened to rape detained women. Footage also captured groups of protesters forced to lie face down in the snow or marched through the streets with hands on heads like prisoners of war.

The Kremlin crackdown was not limited to the streets. In the days preceding Sunday’s protests, the Russian security services conducted a series of raids and detained many colleagues and associates of Navalny. The jailed opposition figure’s wife, Yulia Navalnaya, was among those targeted. She was taken into custody for the second weekend in a row.

Navalnaya’s increasingly prominent involvement in the Russian opposition is yet another echo of the Belarus protest movement. It closely mirrors the role taken up by the wives of imprisoned and exiled Belarusian presidential candidates last year. Sviatlana Tsikhanouskaya, whose activist husband remains incarcerated in Belarus, has since become the face of the country’s opposition movement.

With protest organizers vowing further rallies, Russian President Vladimir Putin looks to be in danger of repeating Alyaksandr Lukashenka’s mistake. When protests first broke out in Belarus last summer, Lukashenka aimed to crush any challenges to his authority by deploying immediate and overwhelming force. This response backfired disastrously. What had begun as a targeted protest over election fraud soon became a national uprising.

The Belarus dictator’s Russian counterpart now risks a similar outcome. The current wave of protests in Russia began over the arrest of Navalny, but many participants have already begun expressing far broader dissatisfaction with the Putin regime. With examples of police brutality mounting, numbers will likely swell further and grievances will become more general in nature.

It is important to note that Russia is not Belarus. Putin enjoys far higher levels of popularity than Lukashenka has ever achieved. He can also count on an infinitely larger security apparatus, along with vast financial resources.

Nor is Putin entirely reliant on brute force. So far, the Russian authorities have deployed an array of clever responses designed to rob the protest movement of momentum. They retain almost complete control over a sophisticated media ecosystem that serves as one of the world’s most effective propaganda tools.

Nevertheless, it is clear that Moscow and Minsk now find themselves locked in a mutual embrace of political co-dependence. Since August 2020, Putin had dominated the unequal relationship between the two countries and was effectively responsible for propping up the Lukashenka regime. In recent days, this has given way to a growing sense that the two dictators must stand or fall together. Lukashenka himself predicted this predicament back in September 2020, when he warned that if the protest movement in Belarus succeeded, Russia would be next.

Putin finds himself trapped in a classic authoritarian dilemma. Does he risk further polarization by expanding the crackdown against protesters? The Russian ruler is characteristically risk averse, but everything about his political philosophy and past conduct indicates he will not shy away from confrontation if necessary.

As he weighs up his options, Putin will no doubt be eager to avoid a repeat of the situation in Belarus, where anti-regime protests are now approaching the half-year mark and refuse to die out completely despite the best efforts of the authorities. At the same time, Lukashenka’s weakened position and pariah status are a warning to Putin against becoming overly reliant on terror tactics and the loyalty of security services.