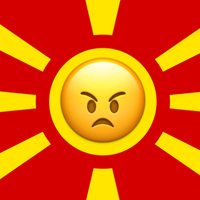 Ahead of the September 30 nationwide referendum to determine the country’s name, Macedonia remains on high alert for disinformation from at home and abroad. The campaign on all sides of the referendum has included a substantial digital and online component.

Many of the events held by the “Yes” campaign have been broadcast on Facebook, which is the country’s most-used social media platform. One event stuck out, as it was targeted by inauthentic social media engagement centered well outside of Macedonia.