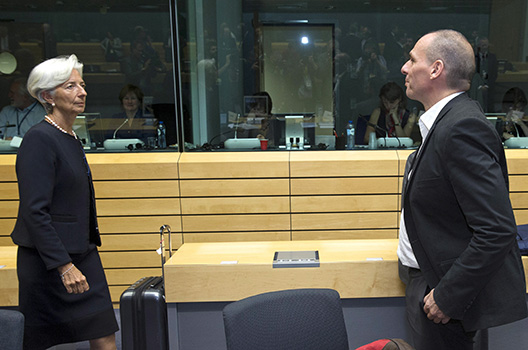 Faced with a $1.8 billion debt payment to the International Monetary Fund (IMF) on Tuesday, Greece was unable to reach an agreement with its Eurozone partners and the IMF yesterday in the latest round of talks in Brussels as both sides failed to make progress on key issues such as pension reform and taxation. A final session of negotiations will begin on Saturday, where Greece will have one last chance to strike a deal to unlock $8.06 billion in bailout aid. Absent an agreement, EU leaders are prepared to implement measures such as capital controls and even humanitarian aid to help stem the spread of economic contagion caused by a Greek default. If capital controls do in fact have to be adopted, they will be discussed and finalized over the weekend.

As part of the Atlantic Council’s Members’ Conference Call Series, Dr. Andrea Montanino, Director of the Council’s Global Business and Economics Program and former Executive Director of the IMF for Greece, led a question-and-answer discussion with Professor Aristotle Tziampiris, Director of the Center for International and European Affairs at the University of Piraeus in Athens, on the various sticking points currently hampering negotiations.

What are the Positions of the IMF, the EU, and the Greek Government?

This past week has seen a succession of important developments, including the introduction of new, more concessionary reform proposals from all three parties. On Monday, the Greek government submitted an eleven-page proposal to its European creditors based mainly on higher taxes—particularly on corporations—and social contributions in order to avoid large spending cuts. It pushed for a three-tier Value Added Tax (VAT) structure—with rates of 23, 13, and 6 percent—and for a gradual pension reform process.

In response, the IMF submitted a counterproposal Wednesday insisting on higher spending cuts through more ambitious pension reform. It put forward a long list of “prior actions”—that is, actions to be taken before a disbursement of additional funds—effective July 1 in order to complete the sixth review of its financial assistance program. Among the various demands outlined in its five-page list of prior actions, the IMF wants Greece to accelerate its timetable for raising its effective retirement age—to sixty-seven by 2022—and to phase out a so-called “solidarity grant” that provides top-up bonuses to poorer pensioners.

Rounding off the week, Eurozone finance ministers submitted a redrafted counterproposal Thursday morning, which largely resembled the IMF document but which made some important concessions to Greece, including a plan to incorporate the three-tiered VAT system and a longer timetable for phasing out the solidarity grant. Nevertheless, Eurogroup leaders refused to budge on a number of other sticking points, such as VAT exemptions for the Greek islands.

Progress on all three cornerstones of the bailout negotiations—taxation, privatization, and pension reform—is crucial for Greece’s long-term recovery, but Greece and its creditors have yet to see eye-to-eye on any one of these issues. As Professor Tziampiris noted, Greece’s proposal from Monday relied too heavily on taxation and not enough on growth, an issue that has barely been featured in the current discussion. Like the leaders of several other creditor institutions, IMF Director Christine Lagarde has emphasized that higher taxes cannot bridge the financing gap, and that a more heterogeneous mix of policies is needed. If a deal can be reached by the weekend, a discussion about economic growth and competiveness in Greece will likely follow shortly thereafter.

Judging by the same Greek proposal, privatization will proceed in a largely piecemeal fashion due to the government’s insistence on heavy conditions (i.e. the government wants to maintain a stake in privatized companies, among other demands). Out of ideological reasons and a desire to provide employment, not to mention fierce opposition from unions, Athens is reluctant to accelerate the privatization process, which means that what does take place will fall short of the IMF’s initial targets.

On the topic of pension reform, Professor Tziampiris argued that the issue is less about numbers and more about rationalizing the current system so that benefits are distributed in a more needs-based and egalitarian manner. On the one hand, Greece provides generous pensions to those who, by exiting the workforce at a very early age, largely avoided the burden of paying into the system. At the same time, however, there are many Greeks who, despite having paid their dues in full, are struggling to live off of slashed pensions. Therefore, any agreement on pension reform must reward late retirees and stop using those who exploited the old system as an excuse to reduce pensions across the board.

Why is a Deal Needed Before the End of June?

On June 30 two events will occur:

German Chancellor Angela Merkel stressed yesterday afternoon that a deal must be completed by the weekend so that emergency aid can be unlocked in time for Greece’s debt payment to the IMF on June 30. While Greece can still reach a deal with its European partners, it will face more difficulty in doing so with the IMF, which needs more reassurance that Greece’ public debt can be sustainable. The IMF is a rules-based institution said Montanino and, as such, can provide funding only if the country does not have an unsustainable sovereign debt trajectory. Given its low economic growth, low primary surplus, and high stock of public debt, this is clearly not the case with Greece. Some debt relief will be necessary in the future, but none is likely to be forthcoming in the current agreement.

What are the Political Constraints in Greece?

Given that Prime Minister Alexis Tsipras must appease certain actors within the Greek Parliament in order to preserve his government’s legitimacy, the question of whether he even has the political power to strike a deal is an important one. According to Professor Tziampiris, a majority of Greek Members of Parliament (MP) will favor an agreement regardless of the specific contents of the deal, mainly because they understand that the alternative—i.e. bankruptcy and capital controls—is far worse. Yet even with a deal, Syriza’s long-term legitimacy will be in question given Tsipras’ failure to deliver on his party’s ambitious domestic agenda. Although such a failure was inevitable due to the constraints inherent in the current agreement, it represents a reality check for Tsipras’ government, which in practice has become more left-center in its orientation, despite its radical rhetoric.

Among those scrutinizing Tsipras’ more conciliatory stance are members of his party’s restive hard left faction, who worry that he will acquiesce to the same austerity measures he so often condemns in his public speeches. As Professor Tziampiris noted, if more than ten Syriza MPs vote against a new bailout package — or even abstained — the Syriza-led government would need the help of pro-European opposition parties such as New Democracy to push it through, which would hurt Syriza’s credibility and might encourage a reshuffling of Parliament, if not a new round of elections altogether.

On the international front, Greece faces a choice of whether to remain with Europe and the West or to turn toward Russia. Relations between Athens and Moscow have warmed significantly in recent months, with both sides holding a number of high-profile meetings to discuss a range of proposals from Russian investment in Greek infrastructure to the construction of an oil pipeline through Greece. In an attempt to enhance its negotiating power, Greece has threatened to move closer to Russia if an acceptable deal cannot be reached with Europe. However, despite growing Russian influence in the country’s politics and five years of harsh austerity, a clear majority of Greeks want to stay with the West and remain part of the EU and Eurozone.

According to Dr. Montanino, four months of negotiation have been effectively lost due to the conflicting and seemingly inflexible positions of the three parties involved. As long as the IMF continues to insist on debt restructuring, the European Union on tougher structural reforms, and the Greek government on its red lines, negotiations will remain at a standstill.

However, a deal is still possible. It will be a huge shame for Europe to be responsible for the world’s biggest default to the IMF. Besides, it is not worth the risk, since no one at this point can really evaluate the severity of possible contagion effects on other euro area countries and on the global economy as a whole.

The possible outcomes are the following:

1) A short-term deal with all parties to unblock enough resources to pay back the IMF with an extension of the EU program until, say, March 2016.
2) A deal only with the Europeans with the IMF who puts its program on hold, as has been the case for several months. Lacking enough assurances that the debt will be sustainable, it does not complete the review; according to Montanino, this is the most likely scenario.
3) Alternatively, leaders may decide on Saturday to opt for a default within the Eurozone and implement capital controls to avoid likely outflows of capital.

In all cases, Greece and its EU counterparts will continue discussions in order to find more stable solutions. The current negotiations will, at best, succeed in providing Greece with short-term emergency aid, but will not address any of the longer-term, systemic issues underlying the crisis.