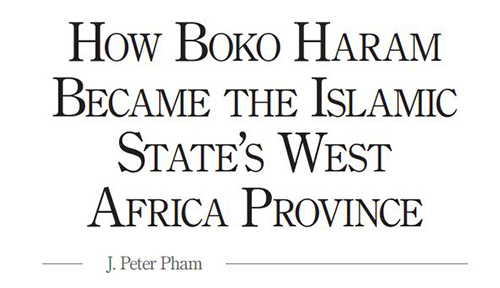 In his article, Pham traces the evolution of the Boko Haram insurgency and details how the group’s ideology, rhetoric, and operations have shifted with each new iteration. In a very short period of time, Boko Haram has transformed from a small band of militants focused on localized concerns to a major terrorist organization espousing a clear jihadist ideology and using high levels of violence to seize and hold territory. The group’s most recent transformation, illustrated by its pledge of allegiance in early 2015 to the so-called Islamic State and its subsequent rebranding as the “Islamic State of West Africa Province,” presents new opportunities for fresh streams of recruits, as well as funding and media support. Furthermore, this rebranding is strategically significant, insofar as it could lead to the internationalization of a threat that has thus far been largely confined geographically to the Middle East.