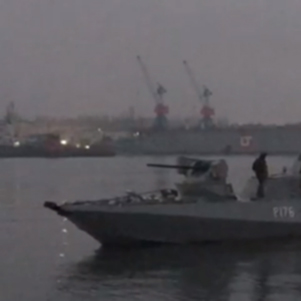 Russian escalation at the Kerch Strait ended in cannon fire and the capture of three Ukrainian military vessels, leaving at least six Ukrainian sailors wounded. This escalation was a continuation of increasing Russian aggression in the Sea of Azov and around the Kerch Strait, where Ukrainian shipping and maritime activity has been routinely harassed.

On November 25, 2018, two Ukrainian gunboats and an accompanying tug boat were denied entry into the Sea of Azov while attempting transfer from Odesa to Mariupol. The Russian Federation considers the Crimean peninsula its territory since it illegally annexed and occupied the peninsula in 2014. This stance led Russia to grow increasingly aggressive in the Sea of Azov, although it is considered internal waters of both countries following a 2003 agreement.