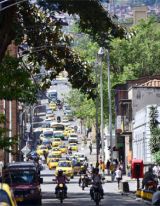 Cities are global leaders whose innovative policies are increasingly transcending boundaries to shape domestic and international trends. The relative power of cities to influence the global agenda will only increase in the coming decades. More than half of the world’s population lives in urban areas; by 2050, 70 percent, or more than six billion people, will be urban dwellers.

The Atlantic Council is at the forefront of an emerging global dialogue on urbanization through its Urban World 2030 project, which brings together foreign and security policymakers and urban specialists to address ways to turn global urbanization into a net positive.

Rio de Janeiro has launched an ambitious project to digitalize impoverished areas and tackle citizen connectivity challenges for low income people. The city will also host the 2014 World Cup and the 2016 Olympics.Latin America, the most urbanized region in the world, merits special attention in how to capture the growth of cities to create innovative policies that foster equitable economic growth, good governance, long-term housing and public space solutions, and efficient urban services. The Atlantic Council’s Adrienne Arsht Latin America Center, which began operations in October 2013, will collaborate with the Council’s Strategic Foresight Initiative to be a leading voice in examining innovative urban solutions in Latin America and share lessons learned within the global context.

A busy street in Medellín, Colombia, where more than two million people commute in the country’s second largest city. Medellín has transformed itself from murder capital to the most innovative city in the world in just two decades.Latin America’s dramatic shift to a highly urbanized region has significant ramifications, many of which have been detailed by the McKinsey Global Institute:

As the world’s most urbanized region, Latin America is a critical platform from which to launch a global dialogue on urban trends. For urbanization to be a net positive for Latin America—and for the world to learn from the region’s experiences—policy formulation must take into account the following:

In the coming decades, cities will increasingly shape local and national policy and decision-making. The Adrienne Arsht Latin America Center seeks to become a hub for thought leadership on Latin America’s leading role in the global urban trend by examining lessons learned around the region’s urbanization story and connecting Latin America’s experience to that of cities across the world.