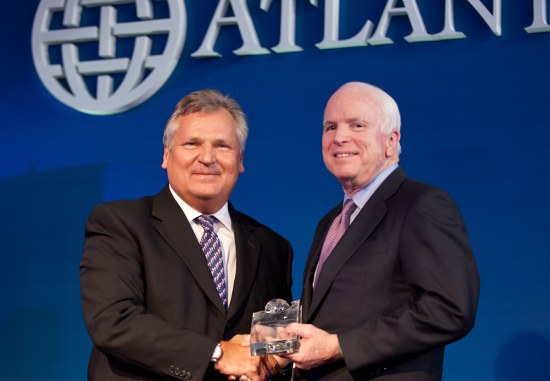 The 2011 Freedom Awards were presented to US Senator John McCain, Polish Foreign Minister Radek Sikorski on behalf of the Polish people, Moldovan Prime Minister Vlad Filat on behalf of his people, and Solidarity stalwarts Adam Michnik and Helena Łucywo of Gazeta Wyborcza. This year’s awards dinner also paid tribute posthumously to former US Deputy Assistant Secretary of State Ron Asmus for his extraordinary contributions to the transatlantic community. In recognition of the groundbreaking events in the Middle East and this year’s troubling crackdown in Belarus, awards were also given to the Belarus Free Theater, the Human Rights Center “Viasna” and the Belarusian Association of Journalists on behalf of the people of Belarus, as well as Egyptian blogger and founder of the April 6 Movement, Esraa Abdel Fattah. US Ambassador to Poland Lee Feinstein and Poland’s Ambassador to the United States Robert Kupiecki served as the evening’s co-chairs.

The awards ceremony took place during the annual Wrocław Global Forum, held June 9-11 in Wrocław, Poland. Convened in one of Central Europe’s most dynamic and beautiful commercial and cultural hubs, the Forum brought together over 200 top decision-makers and business leaders to discuss Central Europe’s role as a critical partner in U.S. efforts to strengthen economic, political and security ties across the Atlantic.

Ronald D. Asmus, Executive Director of the Transatlantic Center and Strategic Planning of the German Marshall Fund of the US (posthumous), presented by Alexandr Vondra, Minister of Defense of the Czech Republic – Video

Radosław Sikorski, Minister of Foreign Affairs of the Republic of Poland, on behalf of the Polish people, presented by Frederick Kempe, president & CEO, Atlantic Council – Video

Vladimir Filat, Prime Minister of the Republic of Moldova, on behalf of the Moldovan people, presented by Jan Krzysztof Bielecki, Chairman, Council of the Polish Institute of International Affairs – Video