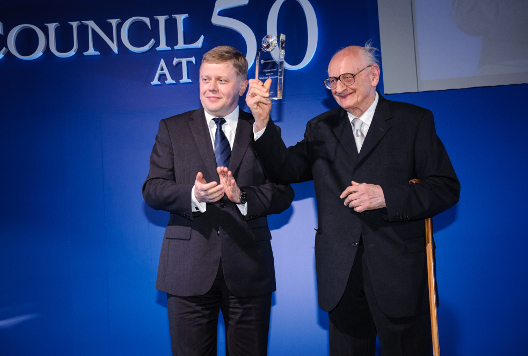 The 2012 Freedom Awards lauded the continuous efforts by an entire nation, two individuals, and one organization to advance democracy and freedom globally.

This year’s Freedom Awards dinner honored the people of Tunisia for bravely initiating a historic wave of change in North Africa and the Middle East. Tunisia’s president, Moncef Marzouki, a tireless human rights and democracy activist, who played a critical role in shepherding his country through the first critical stages of transition will accept the award on his people’s behalf via a poignant video message.

We celebrated Emma Bonino, vice president of the Italian Senate and trustee of the Arab Democracy Foundation, for championing civil liberties and human rights for those whose own governments have failed them.

Wladyslaw Bartoszewski, an Auschwitz survivor, former minister of foreign affairs and current chairman of the Council for the Protection of Memory of Struggle and Martyrdom, accepted an award for his incredible, life-long service to Polish freedom.

The Atlantic Council also presented a Freedom Award to the National Endowment for Democracy, represented by its president Carl Gershman, for its decades of support of civil society and its ongoing mission to strengthen democratic institutions globally.

And finally, we paid special tribute to Ales Bialiatski, Belarusian human rights defender, chairman of the Human Rights Center Viasna, and 2011 Freedom Awardee. In August 2011, Ales was arrested by Belarusian authorities and has been sentenced to four and a half years in prison.

The evening was graciously hosted by co-chairs Lee A. Feinstein, US ambassador to Poland, and Robert Kupiecki, Polish ambassador to the United States.

Wroclaw, Poland is also the home of the Atlantic Council’s Wroclaw Global Forum.