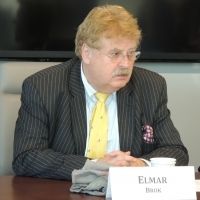 On October 29, 2013 the Transatlantic Relations Program hosted a roundtable discussion at the Atlantic Council with a delegation of members of the European Parliament to discuss US-EU cooperation on policy towards the EU’s eastern partners and Russia ahead of the Eastern Partnership summit in Vilnius, Lithuania, in November.

Elmar Brok, German MEP and Chairman of the Committee on Foreign Affairs of the European Parliament, featured as the keynote speaker. With Ukraine a particular focus, participants weighed in on issues ranging from the possible outcomes of the Vilnius summit to the common US and EU interests in encouraging the eastern partnership countries to form closer ties with the European Union.