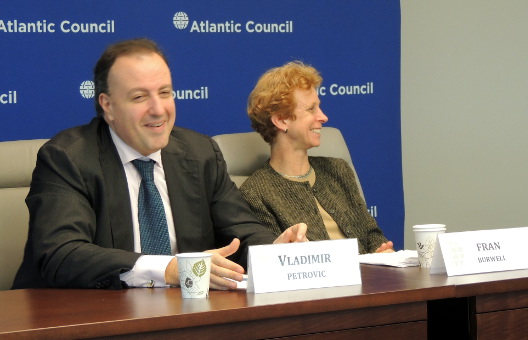 On December 6, 2013, the Atlantic Council’s Transatlantic Relations Program had the honor of hosting Serbia’s Ambassador to the United States Vladimir Petrovic, on the occasion of the completion of his successful tenure as ambassador. Ambassador Petrovic spoke candidly to a select group of Balkans experts from the Washington policy community in an off-the-record roundtable at Atlantic Council headquarters.

The topics of discussion ranged from Serbia’s evolving relationship with the European Union to US-Serbian cooperation and Serbia’s role in the wider Balkan region. The Ambassador and roundtable participants were, on the whole, optimistic about Serbia’s prospects going forward. There was general agreement that a successful European Union candidacy and eventual accession for Serbia is a question of when, rather than if. Though Serbia has a long way to go, the country has made a concerted effort to address issues like judicial reform and the dialogue between Belgrade and Pristina over the status of Kosovo.

The ambassador explained that Serbia has been keen to dispel this myth in the United States and Europe that Serbia is always the “bad guy” of the Balkans. In fact, the US relationship with Serbia has improved to such an extent that US Vice President Joe Biden and former Secretary of State Hillary Clinton both visited the country to further bilateral relations between the two. In addition, the United States has been heavily involved in aiding Serbia in the transition from a security importer to a net exporter of regional security. One way this partnership has worked is through a sister army relationship between Serbia and the Ohio National Guard. In recent years 60 percent of overseas Serbian military education took place in the United States. Bilateral cooperation on the sister army initiative and others like it have been seminal in enhancing goodwill and collaboration on the ground than any other scheme so far.  Roundtable participants agreed that these initiatives could serve as a positive model for future cooperative relationships.

The roundtable concluded with the hopes that Serbia, as one of the bright spots of the Balkans, will play an increasingly greater role in ensuring that the wider region remains on a positive trajectory.