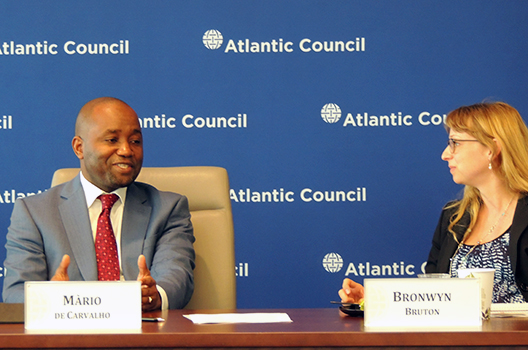 The Southern African nation of Angola has made commendable economic progress since emerging from a twenty-seven-year long civil war in 2002. Rich in natural resources, it has become Africa’s second largest oil producer and has enjoyed a decade of strong GDP growth while gaining in global importance—in 2009, the United States identified Angola as one of three African “strategic partners.”

But prosperity has yet to trickle down to average Angolans. Wealth remains concentrated within elite circles, while 37 percent of the population lives in poverty. Corruption, weak rule of law, and burdensome regulations discourage the investments needed to diversify the economy away from the petroleum sector, and political power is highly centralized under the thirty-five-year rule of President José Eduardo dos Santos.

It is in this context that the Africa Center invited Màrio de Carvalho, chairman of the Executive Committee and Board of Trustees of the Angola Open Policy Initiative (AOPI), to speak about the importance of civil society in Angola. Deputy Director Bronwyn Bruton moderated the discussion.

Since its founding in 2013, AOPI has worked to strengthen Angola’s governance, accountability, and civic participation. It has implemented a local radio program which promotes civic engagement, conducted a landmark, easy-to-read public budget analysis, and published various issue briefs on transparency and good governance topics.

De Carvalho joined the Africa Center for the discussion as the United States prepares to host the first US-Africa Leaders Summit in August, with the intention of strengthening trade and investment ties and supporting democracy and peace and security. Angolan President José Eduardo dos Santos has not yet confirmed his attendance at the summit.

In addition to his role at AOPI, de Carvalho is the CEO of Grupo Gallium Limitada, which provides financial services and technical training to Angolan-owned businesses, particularly in the oil and gas sector. He has also served as the chairman of Express Support Services and the CEO of SONANGALP. De Carvalho received his MBA from the American Graduate School of International Management in Phoenix, Arizona, and is a frequent lecturer on energy issues.