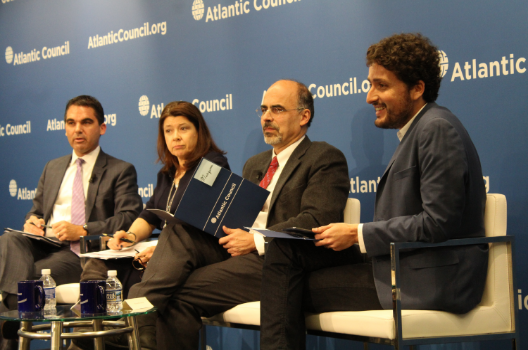 On October 28, Brazilians elected their next president: Jair Bolsonaro. He will step into office at a pivotal economic moment for Brazil, following a campaign of heightened polarization. Can the newly elected leader, alongside new voices in Congress, implement the reforms necessary to usher Brazil into a new economic era? To discuss the future of Brazil’s commercial and investment outlook, and what’s next for US-Brazil relations, the Atlantic Council’s Adrienne Arsht Latin America Center and Global Business and Economics Program hosted a public event on November 1, two days after election outcomes were announced.

Jason Marczak, director of the Atlantic Council’s Adrienne Arsht Latin America Center, kicked off the discussion by framing the results of the election. He noted the high levels of polarization and impact of disinformation in a context of increasing crime rates, strong anti-corruption sentiments, distrust in the establishment, and tough economic times.

Lisa Schineller, managing director of sovereign ratings at S&P Global Ratings, started the panel conversation by addressing the fiscal challenges ahead for the new administration. With Brazil’s debt at about 60 percent of GDP and deficits up to 7 percent, Brazil will need to prioritize not only pension reforms, it will also have to contain spending and potentially restructure taxes, she argued.

Mauricio Mesquita Moreira, principal economic advisor at the Integration and Trade Sector of the Inter-American Development Bank, noted the new administration will also have to address Brazil’s fiscal imbalance before it can discuss and analyze any long-term solutions and prospects for the Brazilian economy. Yet further progress on structural, corrective fiscal policy is expected to be slow, independent of election outcomes.

Ricardo Senra, Washington correspondent for BBC World Service and BBC Brasil, emphasized the importance of governability for the implementation of such economic reforms. With a Congress comprising more than 30 parties, the next administration faces an uphill battle in addressing the economic setbacks described by Schneller and Mesquita Moreira. Particularly for President-elect Bolsonaro, Senra argues a concrete dialogue with Brazilians that did not vote for him, particularly the 42 million that did not vote for either candidate, will be imperative. And although Paulo Guedes, Bolsonaro’s chief economic advisor and future super minister of the economy, was a bridge between Bolsonaro’s campaign and the international trade and investment community, the two differ on many areas, and the success of the relationship remains uncertain.

Reforming Brazil’s pension system — which Mesquita pointed out represents 40 percent of the budget and is forecast to comprise 80 percent in 10 years — will be one of the new administration’s first tasks. Additional reforms will need to happen also on the subnational levels – per Schineller, local governments’ budgets are suffering from the same rigidities in terms of payroll and pensions.

Bolsonaro has also proposed reducing the number of ministries to a record-low of 15 and advancing on privatizations of key state-owned enterprises. Mesquita Moreira highlights the importance of investing in institutions and independent regulatory agencies to strengthen oversight and checks and balances, cautioning against relying solely on a reduction in the size of the state. On privatizations, Schineller pointed out Brazilians will be more inclined to back efficient state presence and ownership rather than the privatizations of all state-owned enterprises.

Regarding the future of trade and US-Brazil economic relations, Mesquita describes Brazil’s historical reliance on commodity exports. “If you add all the other incentives to produce for the domestic market, you are not bound to see much of an export boom in things other than commodities,” he noted. Mesquita sees Brazil’s foreign policy under Bolsonaro breaking from that of past administrations and being strategic for Brazil’s commercial interests. If that is the case, Mesquita is not confident of a Brazil-US trade deal, especially considering China, Brazil’s main trade partner.

Schneller notes that although Brazil is not on top of the US trade agenda, given these countries’ strong foreign direct investment ties, trade will be a route of increased partnership. Mauricio Mesquita considers that in trying to diverge from the former administrations’ foreign policy, Bolsonaro may increasingly approach trade in a pragmatic way. As China will continue to be an important partner for Brazil, Mesquita hopes Bolsonaro will adopt a realistic approach.

When asked about the challenging costs to do business in Brazil, Senra quoted former US ambassador to Brazil, Thomas Shannon, who said, in reference to Tom Jobim, “Brazil is not for beginners. Brazil is not for the ones in a hurry,” improvements remain to be seen.

Bart Oosterveld, director of the Atlantic Council’s Global Business and Economic Program, closed the conversation emphasizing the importance of Brazil to the global economy. Oosterveld noted “what Brazil probably cannot have, given the current US administration, is a deep economic integration with China and the United States at the same time.” Nevertheless, Oosterveld noted the incoming administration seems to be focusing on the corrective issues necessary to address the challenges for the Brazilian economy.