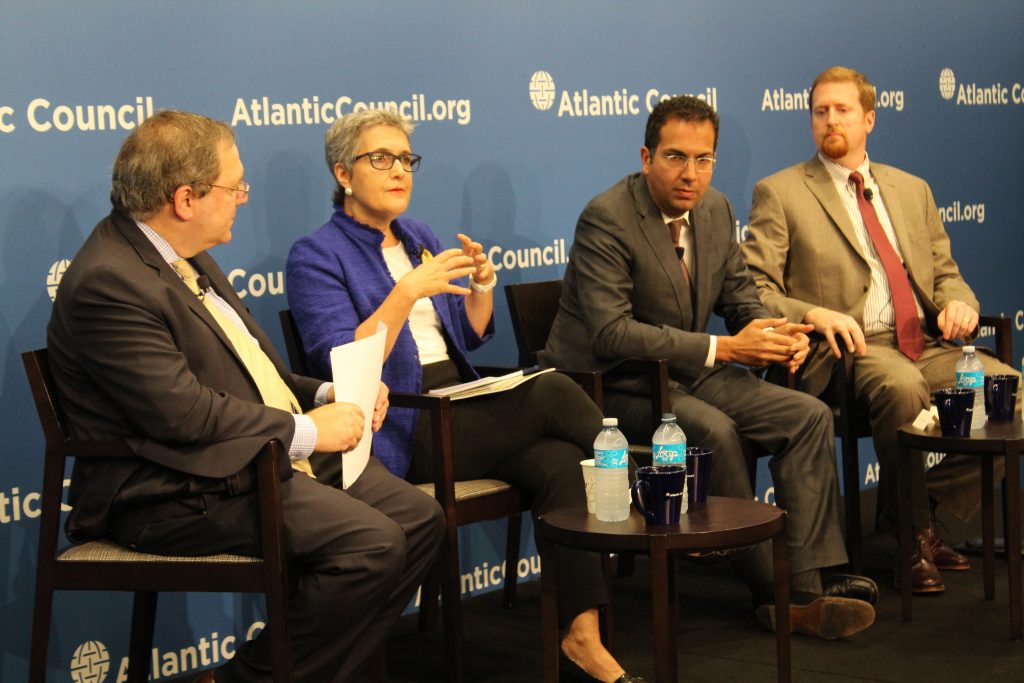 David Sanger, a national security correspondent with the New York Times, moderated a discussion on US strategy toward Iran with Ellen Laipson, a distinguished fellow at the Atlantic Council’s Brent Scowcroft Center on International Security; Amir Handjani, a member of the Atlantic Council’s board of directors; and Michael Connell, director of the Iranian Studies Program at the Center for Naval Analyses in Washington on October 19. Laipson is the author of a new strategy paper, “A New Strategy for US-Iran Relations in Transition.” (Atlantic Council/Victoria Langton)

On Wednesday, October 19, the Brent Scowcroft Center on International Security’s Middle East Peace and Security Initiative released Atlantic Council distinguished fellow Ellen Laipson’s A New Strategy for US-Iran Relations in Transition, the sixth installment in the Atlantic Council Strategy Paper series. The report advocates for a balanced approach towards American relations with Iran that builds incrementally on the progress made by the Joint Comprehensive Plan of Action (JCPOA). The discussion was hosted by New York Times National Security Correspondent David Sanger, and included Michael Connell, director of the Iran Studies Program at the Center for Naval Analyses (CNA), and Atlantic Council board director Amir Handjani. The panel discussed recent developments between Iran, the United States, and the Gulf Cooperation Council (GCC) member states, as well as potential strategies that could bring about a safer and more peaceful Gulf region.

Laipson pointed out that relations between the United States and Iran have been mixed since the signing of the nuclear deal. She considers recent, negative developments to be a result of high expectations for economic expansion in the wake of the Joint Comprehensive Plan of Action that have not yet been met, which has resulted in an erosion of the potential for trust between both states. Laipson illustrated this point with the example of Siamak and Baquer Namazi, prominent Iranian-American businessmen who were each sentenced to ten years’ imprisonment for cooperation with the United States. Laipson emphasized the importance of clear communication with the Iranian government about which types of behavior are unacceptable and will lead to high-intensity confrontations. To facilitate such communication, she stressed the importance of building relationships between high level members of the next Presidential administration and Iranian leadership. Laipson believes that the United States needs to facilitate defense development for our Gulf partners while still discouraging them from confronting Iran directly.

Handjani explained that the Iranian energy market has grown beyond the expectations of many analysts, and is now producing 3.6 million barrels a day. However, unemployment and inflation rates remain high because of what Handjani described as a “skittish attitude” from potential foreign investors and the complex relationship between the public and private sectors of the Iranian economy. As a result, public perception of the United States in Iran has sunk substantially since the nuclear deal. Handjani noted that many Iranians believe the current stabilization in relations is temporary, and will fade once the Kerry-Zarif relationship expires and the ten-year period of the JCPOA approaches. He attributed this belief to the disparity between Western and Iranian perceptions of Iran as a “world power” and the number of minor confrontations that have occurred in recent months. Handjani predicted that Iran is unlikely to experience a significant transformation in its relationships with the United States or Russia, but will try to strengthen its collaboration with Qatari, Kuwaiti, and Omani leadership.

Michael Connell observed that defense budgets in the Gulf are reflective of the broader security concerns of each respective state. Arab Gulf states are investing in high-tech defense packages, whereas Iran’s security priorities (low-tech naval mines and short-range ballistic missiles) indicate its focus on regional security, with the exception of its ICBM program. Connell also observed that Israeli criticism of the JCPOA have been less vocal in recent months as a result of Hezbollah’s preoccupation with the Syrian conflict and the success of the JCPOA in checking Iranian nuclear ambitions. Hezbollah has traditionally served as a deterrent for Iran against Israeli strikes, but Connell observed that Iranian antipathy towards Israel may be increasingly rhetorical. While Israel will not be removed from Iran’s assessment of regional security threats, the year after the JCPOA has been calmer than those before for Iranian-Israeli tensions. Connell observed that Iran sees offensive cyber operations as a cheap investment with high returns. However, Iranian cyber defense is not capable of defending against Iranian or American attacks such as “Nitro Zeus”, which is allegedly capable of disabling Iranian power and defense networks. The “Supreme Cyber Security Council” has been established to attempt to close this gap. Connell expressed doubt that Iranian suspicion regarding Russia will subside in the future as a result of their incompatible culture, Iranian regional ambitions, and history of conflict.