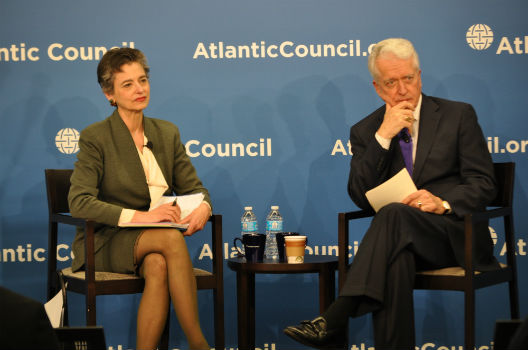 The Atlantic Council’s South Asia Center hosted former Rep. Jim Slattery on February 9, 2015, to hear his thoughts on the US-Iran relationship following his recent trip to Tehran. The discussion, which was moderated by the Council’s Senior Fellow Barbara Slavin, often countered popularly held misconceptions about Iran.

{soundcloud}https://soundcloud.com/atlanticcouncil/a-visit-to-tehran-former-congressman-shares-his-outlook-for-us-iran-relations{/soundcloud}
Slattery was the first serving or former US Congressman invited to Iran since the 1979 Islamic Revolution. He praised the Iranian people and President Hassan Rouhani. “The Iranians are rational. They are smart, sophisticated people and they are good negotiators,” said Slattery.

The Rouhani administration understands that possessing a nuclear weapon would not enhance Iran’s national security because of the threat of an overwhelming US response should Iran ever use that weapon against Israel, he added.

Slattery underscored the commonalities in American and Iranian values and traditions. He emphasized the need for the administrations of both the US and Iran to learn from one another and be open to dialogue. He said that “one of the great problems we have to overcome right now is ignorance.” To address this gap, Slattery stressed the need to increase people-to-people ties.

Slattery expressed support for bridge-building on academic as well as faith-based lines. He said that it is “very important to be respectful of their religion and talk about the common things between Christendom and Islam.” When asked his opinion of the Christian view of weapons of mass destruction, as opposed to an Islamic view, he said, “well you boil it all down and you look at Abrahamic religions… bottom line is that we all have the right to self-defense. And that’s maybe the common ground.”

Slattery also discussed the impact of international sanctions on Iran’s nuclear program, whether the agreement currently being negotiated with Iran should be considered an arms control treaty, and Israeli Prime Minister Benjamin Netanyahu’s planned address to the US Congress.

Slattery said sanctions had led to an increase in Iran’s centrifuge production and urged the US Congress to be patient and wait for an actual arms deal before passing judgment. He expressed disapproval of Netanyahu’s decision to visit Washington two weeks before Israeli elections, saying “what Netanyahu is doing is politicizing this relationship at a historically important moment.”

In closing, Slattery said he hoped a multilateral nuclear agreement would be reached by the end of March and emphasized the need for the US to pursue reconciliation instead of more conflict in the Middle East.