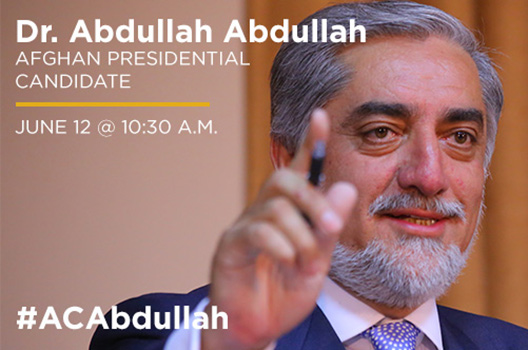 The front-runner in Afghanistan’s presidential election on Saturday, former foreign minister Abdullah Abdullah, called for the next Afghan government to act on a “fresh opportunity for Afghanistan to reset its relations with the international community and … especially with the United States.”

Without voicing criticism of outgoing Afghan President Hamid Karzai, who has had a tempestuous relationship with the United States, Abdullah promised to offer “a new approach from our side and a new spirit of friendship and partnership.” Abdullah won a plurality of votes on April 5 and faces a runoff June 14 against the second-place candidate, former finance minister Ashraf Ghani.

Speaking in an online discussion sponsored by the Atlantic Council and the Center for American Progress, Abdullah underscored that Afghanistan will continue to rely on international financial help, and he called for the broadening of his country’s engagement with the global community to include a greater attention on the economy. As his rival, Ghani, did the previous week, Abdullah spoke to an audience of foreign policy specialists in Washington and abroad via an Atlantic Council video link from Afghanistan.

Among his domestic priorities if elected, Abdullah said, will be a campaign against corruption. For two years, Afghanistan has been ranked (this year in a tie with North Korea and Somalia) as the world’s most corrupt country, according to the annual survey of 177 countries by Transparency International.

“Corruption is institutionalized at this stage,” Abdullah said. “A lack of political will has been the main issue” in delaying the passage and enforcement of aggressive anti-corruption policies by parliament and the Karzai administration, he said. “Rule of law has not been considered as a priority.”

“People will watch us from Day One” of the new government’s tenure, Abdullah said, and a critical first step for the new president will be to appoint government officials whose reputation reflects a commitment to the rule of law.

Among Abdullah’s comments in response to questions from listeners were these:

— On Afghanistan as a refuge for terrorist groups. “Ourselves having suffered from terrorism … I am categorically against the presence of any terrorists” in Afghan territory. Abdullah said he could not confirm the reported presence in northeastern Afghanistan of Pakistani militant guerrilla leader Mullah Fazlullah, but said that “if those terrorists are there, then it will be for the Afghan state to take action against them.”

— On Afghanistan’s historic ethnic divides, notably between Pashtuns who dominate the south and Tajiks, the group with whom Abdullah is most identified. “These are perceptional challenges,” based on “an outdated perception of reality.” Abdullah said voting patterns in the April election, including strong support for him in ethnic Pashtun zones, reflects a diminution of old, ethnic and tribalized politics in Afghanistan.

— On human rights and women’s rights. Human rights concerns and support for women’s access to education and career opportunities have gotten rhetorical support from the state, but too little real attention, Abdullah said. They must “be part and parcel of every decision that is being made by the government.”

–On a future role for President Hamid Karzai. To a question whether Karzai will continue to influence the government after leaving office, Abdullah said, “certainly he will have a political role to play” if he wishes. “We have not discussed” details of any role Karzai might play in a next administration, Abdullah said.