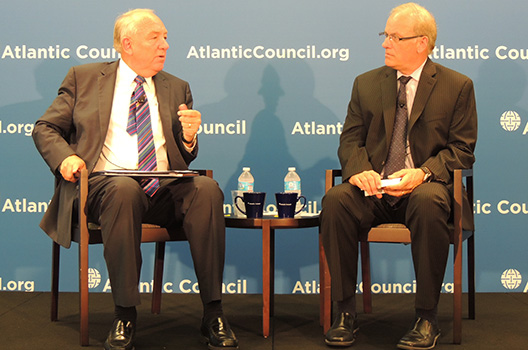 More than 162,000 people have been killed in Syria since the conflict began in March 2011. The Assad regime and some opposition fighters have committed serious human rights abuses, including torture, mass killing, and rape. On Wednesday, July 2, 2014, the Atlantic Council’s Rafik Hariri Center for the Middle East hosted Stephen J. Rapp, ambassador-at-large in the State Department’s Office of Global Criminal Justice, to discuss how to promote accountability for the war crimes committed in Syria. Ambassador Frederic C. Hof, senior fellow and lead expert on Syria at the Council, moderated the discussion.


Ambassador Rapp addressed international efforts to hold Bashar al-Assad and other parties accountable for war crimes and crimes against humanity including the establishment of local offices to document such crimes in Syria. The mission of these local offices is to record the daily violations in Syria; they gather evidence about victims and detainees and document the testimonies of victims and eyewitnesses. The ambassador expressed confidence that these local offices can build a case to be taken up in the International Criminal Court, pointing out that the regime did little to hide incriminating evidence. The list of guilty parties included members of Syria’s military and political elite, as well as some rebel groups.

In discussing accountability measures and the type of tribunal that can be set up for Syria, Ambassador Rapp explained that the best possible model involves local Syrian leadership that is representative of different segments of society. At the same time, there are advantages to involving the international community in the tribunal process.