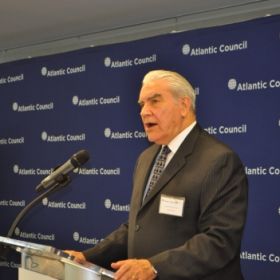 In the face of today’s environmental, economic, and energy challenges, it turns out our engineers may be just as important as our natural resources.  Law and policy doubtless still matter.  But what we’re building today lays the foundation for tomorrow’s innovative technological solutions.  Future generations will reap the benefits of our investments in safe and secure supplies of electricity, meeting economic needs in balance with environmental goals.

These were just a few of the more thoughtful observations at the Atlantic Council and the Global CCS Institute’s event on advanced fossil energy technologies on Monday, September 9, 2013, in Washington, DC.  The event focused on the state-of-the-art coal gasification and carbon capture plant currently being constructed in Kemper County, Mississippi, which will use locally-mined, low rank coal and capture of at least 65 percent of its carbon dioxide emissions for use in enhanced oil recovery operations.

Expected to commence operations by mid-2014, the Kemper County energy facility is the only large-scale power generation project being built in the world today that combines coal gasification and carbon capture and sequestration (CCS).  The facility’s integration of coal gasification and carbon capture represents a milestone of technological achievement and, as mentioned by the event’s moderator, Ambassador Paula Dobriansky, has significant implications for global energy and environmental policy.

General Richard Lawson (ret.), vice-chairman of the Atlantic Council, emphasized the seriousness of these implications by pointing to the growing global demand for energy and the imperative to meet that demand through a broad-based approach relying on all fuel types and technologies, including advanced fossil fuel energy generation and emission control technologies.  He cautioned that one of the greatest and most obvious drivers of conflict in the future will be constraints in the availability of affordable energy.  General Lawson cited the Kemper County project as an investment in new energy infrastructure and new energy technologies that, because of its global significance, effectively serves as a down payment for our future security and prosperity.

The expectation that coal (and other fossil fuels) would remain a mainstay of electricity generation on a global basis was shared by numerous speakers.  Jonathan Pershing from the U.S. Department of Energy said that continued reliance on coal underscored both the potential of CCS and the enormous challenge of delivering practical solutions capable of ensuring access to energy while still meeting environmental goals.  Even where certain technologies or fuels are not currently viable in a given area, future changes in everything from commodity prices to weather patterns might make them essential for preserving energy access or energy security over the long term.  This highlighted the need to consider the value of energy projects on extended timescales, particularly given their high upfront capital costs and long lifespans.

Pershing further stated that the imperative to reduce carbon dioxide will intensify in the years ahead, thereby increasing the importance of meaningful incentives for the development and deployment of innovative new technologies and underscoring the long-term value of sustained commitments to R&D leadership by industry.  Where CCS is available, Pershing said that climate regulation would make the technology competitive with alternatives, such as natural gas, noting, however, that the viability of CCS in a specific location is subject to a wide array of physical, technological, economic, and policy factors.

The event showcased the longstanding research ventures between Southern Company and the U.S. Department of Energy, which, along with KBR, developed the coal gasification and carbon capture technologies at the heart of the project through a series of public-private partnerships and other research collaborations, some dating back to the early 1970s.

Randall Rush, Southern Company’s general manager for gasification systems, observed that the company’s work with the coal gasification technologies being applied in Kemper County has spanned the majority of his and other engineers’ careers.  This life’s work is enabling the Kemper County energy facility, despite utilizing low rank forms of coal, to have air emissions comparable to those of a clean natural gas plant as well as having zero liquid discharge.

Rush noted that Southern Company has run, since 1969, what is now the only broad-based, applied R&D program with dedicated personnel in the U.S. utility industry.  Rooted in the testing of multiple technologies under real-life conditions at actual power plants, the company’s R&D efforts created a platform for learning, experimentation, and innovation.  The company’s research in scrubbers and other pollution control equipment has played a significant role in ensuring that, although coal-fired generation almost doubled between 1970 and 2008, emissions of SO2, NOx, and particulate matter from U.S. coal-fired generation declined by 82-96 percent.

This leadership in R&D, much of it in partnership with the Department of Energy, led to significant cost savings for the company and its customers.  For example, between 2004 and 2012, scrubbers were installed on 16,000 MW of generating capacity at a 20 percent cost savings compared to the rest of the industry.  Overall, more than $800 million in savings can be attributed to research begun in 1973.

For carbon capture technologies, the overall experience and cost curve may prove similar to the development of scrubbers.

Southern Company operates the National Carbon Capture Center (NCCC), a $50+ million research facility next to one of the company’s coal-fired power plants in Wilsonville, Alabama.  Established in partnership with the Department of Energy in 2008, the NCCC provides a platform for the testing and further development of both pre- and post-combustion carbon capture technologies.

The facility can operate 10 different capture technologies at a time, testing them in real-life conditions and accelerating the pace of innovation.  Altogether, the NCCC has accumulated a database of more than 400 capture technologies from vendors all over the world.  According to Victor Der from the Global CCS Institute and Darren Mollot from the Department of Energy, the NCCC and other efforts by the Department of Energy are playing a critical role in driving carbon capture technology forward, not just for coal-fired power generation, but for natural gas and all other energy-intensive industries and enterprises.  They emphasized the need to apply incentives tailored to local conditions, in combination with national and international coordination on technological and policy considerations.

Also key to CCS development has been the leadership and longstanding commitment by the government of Norway, including in particular its own carbon capture center in Mongstad, said Maryann Locke, Energy Counselor to the Royal Norwegian Embassy.  Locke also emphasized the essential role played by public-private partnerships in facilitating the development of new technologies capable of delivering long-term economic and environmental benefits.

The Importance of Technology to Future Generations

Dr. Stephen O. Andersen, who formerly co-chaired the Montreal Protocol’s Technology & Economic Assessment Panel, observed that, today, we are enjoying the benefits of the R&D and the large-scale investments of previous generations.  He said our continued prosperity rests on our willingness to maintain that commitment to R&D and to building big projects — noting that historically this has always been essential to success across environmental, technological, and economic fronts.

Using as an example the issue of stratospheric ozone depletion — another global atmospheric environmental problem that, as recently as the early 1990s, superseded climate change but is now largely solved — Dr. Andersen explained that science and diplomacy came together around the hole in the stratospheric ozone layer to drive demand for new technologies, products, and processes that would be free of the ozone-depleting substances then used in hundreds of thousands of applications worldwide, from air conditioning to weapons platforms and from aviation to telecommunications.  Although developing breakthrough technologies is rarely easy, Dr. Andersen noted that solutions ultimately came not from outsiders, but from within the affected industries.  Chemical manufacturers, for example, made multi-billion dollar investments to replace the very ozone-depleting substances that had been central to their business models for decades.

Seshadri Guha, chairman of the business and technology firm CGN Global, referred to this as having the fortitude to invest in innovation for the future.  Guha stressed that lifecycle costs and material external factors are frequently overlooked by businesses and governments alike when attempting to understand immediate problems.  But the ability to make bold investments in new technologies can drive economic competitiveness and reap both known and unknown benefits for companies and their customers.  Guha stressed the importance of local economies that are friendly to big projects, big investments, and big commitments to R&D.  Because, given the increasingly global nature of economic competition, those localities that appear unfriendly to innovation will inevitably be left behind and likely stagnate as a result.

Mohammad Zaidi, formerly Alcoa’s chief technology officer and co-chair of the World Business Council for Sustainable Development’s Vision 2050 initiative, pointed to Vision 2050’s finding that the complex challenges posed by environmental issues were also driving extraordinary new market opportunities for businesses — from a projected $1 trillion in 2020 to $6.2 trillion by 2050 across energy, water, agriculture, health, and other sectors.  Zaidi emphasized that these opportunities are there only for those companies, countries, and communities willing to undertake large investments in innovation today.  Those content to stand still or simply build yesterday’s technologies will miss out.

Mississippi as a Hub of Innovation and Technological Excellence

Across a wide-ranging conversation over many topics, sectors, trends, and technologies, one of the most relevant observations was by Mississippi State Senator Terry Burton, chair of the state’s Senate Energy Committee.  Senator Burton said that, even where the event’s conversation was not directly trained on the Kemper County energy facility, it was still very much speaking to the project’s promise and potential for advanced energy technology.  Senator Burton said that the Kemper project makes Mississippi a hub of innovation and technological excellence, and that this will carry with it both expected and unexpected benefits for the state and Mississippians in the years to come.  Senator Burton, and others, also reiterated the importance of public-private partnerships and targeted incentives to help ensure that Mississippi remains competitive as a destination for the development of innovative new technologies and the companies willing to build them.

In concluding the event, Ambassador Dobriansky observed that about one-fifth of the world’s population still lacks access to electricity.  Meeting future energy demand, and alleviating energy poverty along the way, will require trillions of dollars in new infrastructure between now and mid-century.  But it is not enough just to invest in capital projects.  Great strides in technological innovation also are needed across all fuel types and all sources of energy.

Innovation at this scale and of this caliber does not just happen — and it turns out that it matters greatly who steps forward to ply their expertise and build the next great projects that extend the frontiers of possibility, sharpening competitiveness, enhancing performance, and driving still more innovation for the future generations to come.  Because, when you turn your back on innovation, all you do is guarantee that, wherever power plants are built in the future, they are built using yesterday’s technologies instead of tomorrow’s.