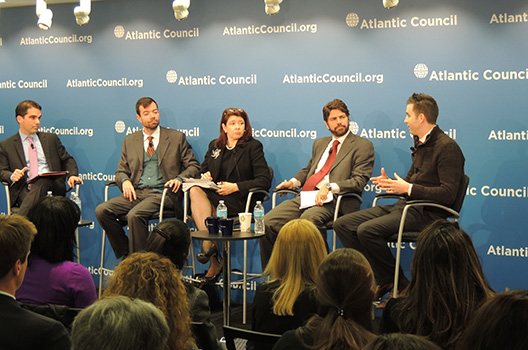 Immediately following her second-term inauguration, Brazilian President Dilma Rousseff announced plans to schedule the first state visit to the United States in two decades. Does her second term mark a potential turning point for US-Brazil relations? What concrete steps can be taken to enhance cooperation in commerce, energy, agriculture, tourism, aerospace/high technology, and other issues?

On January 14, the Adrienne Arsht Latin America Center partnered with the Brazil-U.S. Business Council to lay out an agenda for the US-Brazil relationship in the coming months. Panelists brought an array of perspectives from both the public and private sector in both countries and included Ambassador Anthony S. Harrington, former US Ambassador to Brazil and Chair Emeritus of the Brazil-U.S. Business Council; Washington Correspondent for Folha de São Paulo, Raul Juste Lores; Standard and Poor’s Managing Director of Sovereign Ratings from New York, Lisa Schineller; Braskem’s Vice President of Legal and Institutional Relations, Nick Sprague; and the Latin America Center’s own Nonresident Senior Brazil Fellow from São Paulo, Ricardo Sennes. Latin Aerica Center Demputy Director Jason Marczak moderated the discussion.

The current situation in Brazil and implications for the United States

With falling commodity prices, the Bovespa down, and continued social pressures, the coming months in Brazil will be full of tough challenges. But Dilma’s government has given signs that some changes are on the horizon.

Dilma recently named two key figures to her cabinet: Joaquim Levy as finance minister and Nelson Barbosa as planning and budget minister. Ricardo Sennes described this duo as a “technical and political combination” that represents a strategic change in Dilma’s approach to the economy, which could have important implications for the US-Brazil relationship.

The recent addition of Mauro Viera as Foreign Minister could not be a better fit in terms of deepening Brazil-US engagement, according to Raul Juste Lores. As former Ambassador to the United States, he has the Washington diplomatic ties needed to kickstart renewed relations. His biggest challenge will be making the case to Dilma for increased foreign engagement more generally given budget pressures.

From a ratings perspective, Brazil has a generally positive outlook. Lisa Schineller said that although Standard and Poor’s was the only agency that downgraded Brazil this past year because of macroeconomic deterioration recently, Brazil has a stable outlook when considering its institutional strength and a few positive signals from Dilma.

Looking ahead: Key opportunities for collaboration Three key areas for US-Brazil collaboration potential include in the manufacturing industry, technology and education exchanges, and on a bilateral trade agenda with a new tax treaty.

Another key area of cooperation is education and technology collaboration, which already plays a very important role for private sector workforce development. University-to-university and business-to-business exchanges are already taking place, but there are important ways that the public sector can facilitate more collaboration in this space. This is an area that could see very productive outcomes in a short amount of time.

Finally, one important action item at the top of the agenda should be a bilateral tax treaty, said Sprague, which he explained “would be a huge first step in bringing together closer ties on trade and investment.” Thirty-seven US governors have gone to Brazil in the past four years to try to increase Brazilian investment in their states. Such a collaboration would make both environments more competitive for cross-border investment.