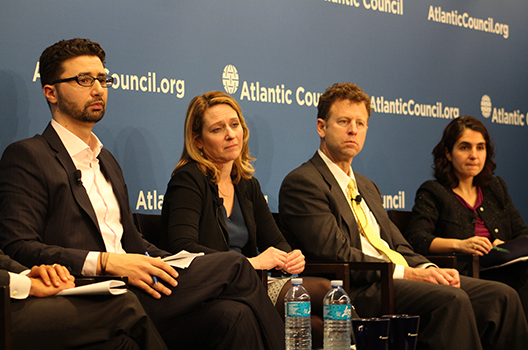 On Friday, April 29 from 9:30 a.m. to 11:00 a.m. the Atlantic Council hosted a discussion of a new report by Brent Scowcroft Center Senior Fellow Bilal Saab, entitled After Hub-and-Spoke: US Hegemony in a New Gulf Security Order, and a debate on US global defense posture in the next decade and how it might affect future US designs in the region. Regional transformation and chaos resulting from the Arab uprisings, the rise of the Islamic State (or ISIS) in the Middle East and beyond, shifting US global priorities, and the increasing influence of outside powers in the Gulf have created a new geopolitical context for the United States’ commitment to the security of the Gulf. The panel discussed the ways in which the region’s new strategic trends and security dynamics impact US interests, priorities, and future force posture and the ways in which the United States can best minimize risks and capitalize on the heightened engagement of European allies in the Gulf.

Saab presented his new report, in which he offers a sustainable strategy for US engagement in the Gulf. His report builds on the premise that, given the strategic context of shifting US policy and fiscal reality in Washington, a smarter Gulf policy would entail closer consultation and cooperation with France and Britain and strategic dialogue with states like China and Russia.

Hicks commented on the balancing act between available resources and the advantages of a robust foreign posture. While the geopolitical environment is in some ways at odds with the resources, Hicks argued that there is a strong economic rationale for maintaining force in a region where it is likely to be used or where it can maintain easy access to multiple theaters – with the Middle East matching both criteria. But given budgetary constraints that exist regardless of cost effectiveness, Hicks said the United States is well advised to urge its allies and partners that spend significantly on defense to spend that money wisely.

Karlin reminded the audience that, when working with both allies and competitors, the United States must remember that different states perceive threats differently. These differences will impact the ways in which other countries are willing to contribute to joint security. For example, European allies like Britain and France see the threat of terrorist groups like Islamic State (or ISIS) similarly to the United States, but they weight ballooning migration flows more heavily. Karlin believes that Russia, on the other hand, diverges from the United States in threat perception regarding the Syria conflict.

Lastly, O’Hanlon spoke on the interests of US competitors China and Russia in the broader region. Russia’s role in Syria has been counterproductive to US interests, O’Hanlon asserted, in part because President Vladimir Putin sensed an opportunity in the United States’ disengaged policy. With China, he said, US policymakers can, however, build on current US-Chinese counterpiracy cooperation, and incrementally increase our joint engagement in the Gulf. China may be open to cooperation in the broader Gulf, but the United States should be extraordinarily careful about military cooperation, especially regarding sophisticated defense technologies. The panel closed with a question and answer session with the audience.