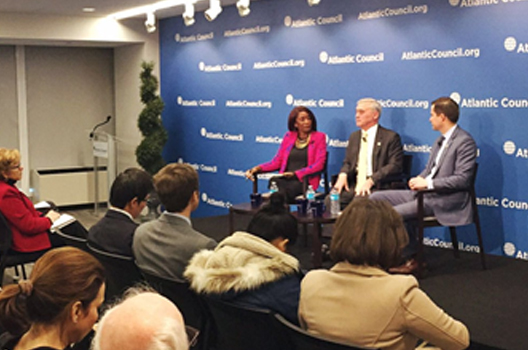 As the Trump administration continues to form its foreign policy and national security strategy, Congress has a distinct role of its own to play in shaping how the United States addresses emerging global threats and approaches its leadership role on the international stage.

At this early stage, little is defined within the administration’s approach. Congress has an opportunity to help characterize what America’s role in world should be and how it aims to deal with issues in the Middle East, especially ISIS and Iran, China, and Russia. To help think through these issues, two Representatives with military backgrounds, Rep. Brad Wenstrup (R-OH) and Rep. Seth Moulton (D-MA), offered their perspectives on the United States leadership role and national security strategy in an environment of increasing global risks. Following opening remarks from Atlantic Council CEO Fred Kempe, the event moderator, Washington Post’s Karen Attiah, led the Congressmen in a lively discussion. At the end of the event, the Rep. Moulton and Rep. Wenstrup took time to answer various questions from the audience.

Image: Moderator Karen Attiah leads Rep. Wenstrup and Rep. Moulton in a conversation about America’s role in the world.