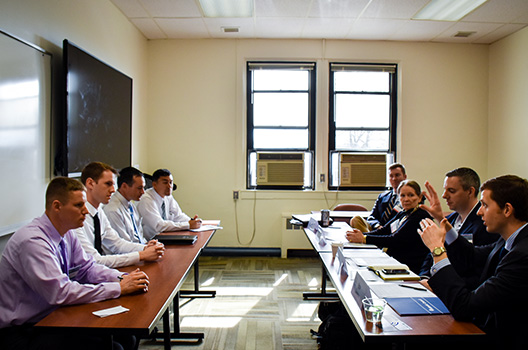 The West Point Black Knights, from the US Military Academy, present their policies to a panel of judges during a qualifying round on the competition’s first day.

Who Attended? And from Where?

The number and variety of teams highlighted the competition’s explosive growth and increasing popularity. Twice as many teams as last year participated in the qualifying round. Students ranged from undergraduates to graduates to mid-career professionals. Small liberal arts colleges as well as military academies sent students. Those studying International Relations joined up with those studying Biology. And several teams from the Midwest and the west coast participated as well.

Dr. James Goldgeier, Dean of American University’s School of International Service, delivers opening remarks to over 200 participants at the start of the competition’s first day.

Current and former government officials worked alongside private sector executives, white hat hackers, and journalists to judge the students. Reflecting on this diversity, Jason Healey, the competition’s founder, was particularly struck by the final round teams. “We had two teams with mid-career government professionals and two with undergraduates,” he said. “This goes to show that folks in their thirties and forties, all the way down to 21-year-olds, can make it to the final round—anyone can win.”

Competitors and their coaches take a break in between qualifying rounds on the competition’s first day.
Cybersecurity