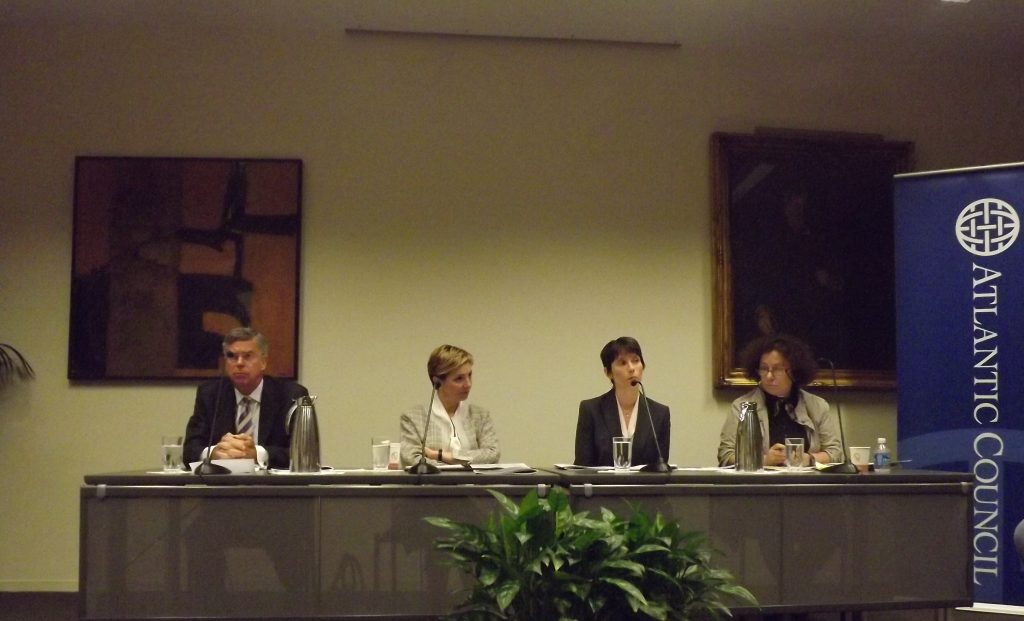 Despite the desire to help Arab countries in the midst of political transitions, the United States and European Union have yet to seize upon opportunities to help generate economic growth and promote the growth of democratic institutions in these countries, according to a new report by Danya Greenfield, deputy director of the Rafik Hariri Center for the Middle East and Rosa Balfour of the European Policy Centre.

The report, Arab Awakening: Are the US and EU Missing the Challenge?, assesses US and EU assistance to the Arab transitioning countries and was presented by Greenfield during a panel discussion on Thursday, June 28 with commentary by Ana Palacio, former foreign minister of Spain, Ambassador William Taylor, special coordinator for Middle East Transitions at the State Department.

Focusing primarily on the US response, Greenfield noted that the Administration has been unable to advance an ambitious vision for how it can support the transitioning countries on the economic and political front, instead relying primarily on piecemeal initiatives or projects that will take considerable time to get off the ground and have an impact. That said, the Administration has made some gains, namely increasing outreach to a more diverse group of political actors, greater emphasis on civil society development, enhanced coordination with European partners and the international financial institution, and proposing new initiatives such as the Incentive Fund that would reward progress on political and economic reform in the partner countries. To more effectively leverage this narrow window of opportunity, Greenfield stressed the need to partner with Gulf countries that have the material resources to make a difference in these countries, and together craft an economic growth strategy that will generate jobs within a reform-oriented, institution-building framework.

On the European side, Palacio noted that Europe is not responding as effectively as it could, in part because it is currently engulfed in a period of inward-looking self-doubt, given current financial problems and the declared US pivot toward Asia. She also highlighted the difficulties for Europeans to present a united position regarding the Arab awakening due to significant regional differences: Nordic countries and Eastern Europe tend to be enthusiastic and sympathetic toward the transitioning Arab states, while southern European states, such as Spain and Italy, tend to view current political developments with more skepticism and concern. Palacio called on the EU to use the opportunity of these transitions to engage Turkey in new ways and create a trilateral dialogue between the EU, Turkey, and the United States. She asserted the need to leverage the resources of the international financial institutions (IFIs) such as the IMF, World Bank, and African Development Bank, in helping to promote economic growth, job creation, and support for small- and medium-sized enterprises (SMEs).

Taylor defended the Administration’s record and noted that the United States has not taken a heavy-handed approach, but rather actively supporting these transitions in a way that is responsive to the needs and priorities set by the new transitional governments and their constituencies. He reiterated that the administration is pursuing demand-driven assistance which would take into consideration the unique needs of individual countries. He stressed that US officials meet regularly with their European counterparts and are working closely with the EU representatives like EU Special Representative to the Southern Mediterranean Bernardino Leon. Taylor also stated that the administration’s new incentive fund for the Middle East, proposed in the FY2013 budget request, will enable to United States to move more quickly on initiatives rather than appeal to Congress for approval on every specific new initiative. In his estimation, the administration is not missing the challenge on the Arab awakening because it will be up to people in the region themselves to meet this challenge and ensure successful, democratic societies, and ultimately dependent upon the actions of the United States and other external actors.

During the question and answer session the panel discussed specific policy initiatives and recommendations. In response to a question about free trade agreements (FTAs), Hariri Center senior fellow, Mohsin Khan, stated that the United States is lagging behind the EU in its pursuit of such agreements, and should put offers for FTAs on the table. Palacio added that a complementary approach on governance reform is needed that is not directly addressed by FTAs and that the Deep and Comprehensive FTAs (DCFTAs) being pursued by the EU would take considerable time and effort to push through. Fran Burwell, director of the Atlantic Council’s Transatlantic Program, commented that the DCFTAs would become increasingly difficult to negotiate as FTA negotiations have a legacy of leaving behind bad feelings on both sides of the table. Coupled with the EU’s increasingly difficulty handling issues of conditionality, Burwell stated that such negotiations could hit a stopping point and contribute to a negotiating process that would result in several “fits and starts.” Greenfield noted the importance of FTAs for the business communities in the MENA region and touted their symbolic value in helping reformers advance their agenda and restoring the United States’ lost credibility in the region. Michele Dunne, director of the Hariri Center, noted the importance of engaging with groups outside the government and elected officials, such as the business community and civil society groups, because they will be there far longer than one or two election cycles and have a long-term interest in promoting sustainable reform and development.

The panelists and participants agreed that leveraging the resources of the IFIs would be essential in helping the transitioning countries’ economies. Khan stated that an IMF program for these countries is absolutely necessary and that IFIs could marshal significant amounts of money whereas the United States and EU are currently cash-strapped by financial difficulties. Taylor noted that the United States has been advocating for an IMF program for Egypt, which would help meet the $11 billion that the Egyptian government needs to sustain its economy in the coming year. This type of support and leverage with the IFIs could be utilized for other countries and other programs as well.

In response to a question about the timeframe of new US assistance proposed in the FY2013 budget, given that approval will not come until sometime next year, Greenfield concluded that one of the main problems in US support of the transitioning countries has been the widely divergent timeframes of Washington and that of the region itself. Greenfield attributed the lack of concrete deliverables from the United States, in part, as a result of this mismatch. The economic challenges of Tunisia, Egypt, and Libya simply cannot afford to wait for Washington’s frustratingly slow processes to deliver real impact on the ground.