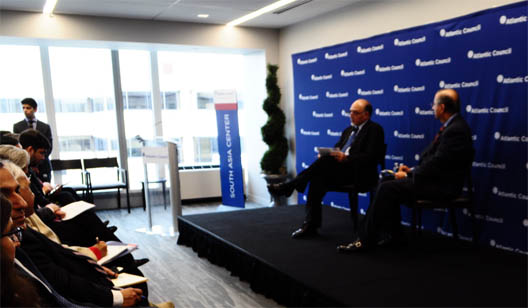 A team of sixty former officials and other experts from Afghanistan, Pakistan, India and neighboring countries is lobbying those governments to stabilize the region by restoring Afghanistan’s strategic neutrality at the center of Asia. The group, including ex-ministers, diplomats and legislators, as well as scholars, has drafted a roadmap to defusing regional conflicts that, if unresolved, will sustain the support within Pakistan for the Afghan Taliban and allied guerrilla movements, and fuel continued war in Afghanistan. The team held eighteen months of consultations that included governments throughout the region, and launched their report in Washington February 4 at a conference hosted by the Atlantic Council’s South Asia Center.

The Joint Declaration on Regional Peace and Stability, drafted largely by teams from Afghanistan, Pakistan, India and the former Soviet states of Central Asia, was facilitated and funded by the German public policy foundation, the Friedrich Ebert Stiftung. “It’s not an academic paper,” said Sarah Hees, a Friedrich Ebert coordinator on peace and security policy. “The document has created a common narrative” and understanding among policy specialists in Central and South Asia, including “regional agreement on how to … implement these policy recommendations,” Hees said. The group, while an exercise in informal, “track two” diplomacy, has begun lobbying governments – in Asia, NATO and the United States – to implement its key recommendations by as early as next year.

A central goal of the project is to create a permanent, Afghan-Pakistani working group – of government officials, legislators and civil society leaders – to directly confront unresolved grievances between the countries that have created a decades-old war zone along their border. Afghanistan has never formally recognized the frontier between the countries nor renounced historic claims to a large swath of what now is Pakistan. And Pakistan’s military and government agencies for decades have secretly supported the Afghan Taliban and other guerrilla movements in an effort to exert Pakistani political control deep into Afghan territory.

“How do we arrange the architecture [of security] in a way that is not aimed towards fighting each other but at consolidating the state” in both Afghanistan and Pakistan? asked Khalid Aziz, a former senior civil servant who heads the 11-member Pakistani team in the dialogue. “That is the difficulty and that is where trust-building is extremely important,” he said. Another critical step is reducing conflict between Pakistan and India that those countries have extended into their Afghan policies.

To a question about why Iran – a neighboring country critical to Afghanistan’s stability – had no broad-based team in the project, Mahmoud Saikal, convener with the Afghanistan Policy Group, noted that scholars from the Tehran-based Institute for Political and International Studies joined the group’s meetings and reviewed its report. The institute is a think tank linked to Iran’s foreign ministry.

Saikal underscored the risks within Afghanistan of this year’s elections for president and for provincial councils. Following the 2009 vote in which President Hamid Karzai claimed re-election despite clear evidence of vast ballot fraud, “we still have a theater set for, possibly, fraud of an industrial scale” in this year’s vote, said Saikal, who is convenor of the 13-member Afghan team in the project. For Karzai’s successor to command real political legitimacy, the balloting scheduled for this spring must reduce fraud and should achieve a turnout of about 60 percent, Saikal said.

While Afghan President Hamid Karzai has frustrated the US government by refusing to sign an agreement to keep a US military mission in Afghanistan beyond this year, the Afghan government is sure to approve the deal, Saikal said. “It’s an agreement of necessity,” he said.

“Afghanistan needs at least $12 billion on average a year to function as a state,” but generates only $2.3 billion of its own revenues, Saikal said. The necessary foreign aid can come only if the proposed “bilateral security agreement” is in place. “It’s important to know that [the] majority of Afghan people have already spoken” in favor of the agreement, through a traditional, consultative council of 2,500 elders summoned last year by Karzai, Saikal said. The US has protested Karzai’s delay of the deal, saying it impedes the necessary planning for a post-2014 mission. Karzai has used the delay to pursue secret contacts with the Taliban in hopes of reaching a peace agreement without US involvement, the New York Times reported February 3.