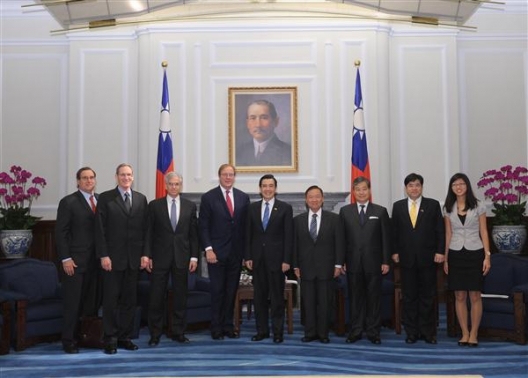 On October 7-10, 2013 a delegation from the Atlantic Council’s Brent Scowcroft Center on International Security visited the Republic of China (Taiwan) to discuss a host of security and economic issues with top leaders, academics, and think-tank representatives. The group paid visits to several high-level officials, including the President of the Republic of China, the Minister of Foreign Affairs, Commander-in-Chief of the Republic of China Navy, Deputy Secretary-General of the National Security Council, the Vice Minister of Economic Affairs, and former Minister of National Defense. The delegation also met with representatives from the Democratic Progressive Party and the Straits Exchange Foundation.

Topics discussed included Taiwan’s declining defense spending, the growing trade and cultural links between China and Taiwan following the signing of the Economic and Cooperation Framework Agreement (ECFA), and also the Cross Strait Agreement on Trade in Services.