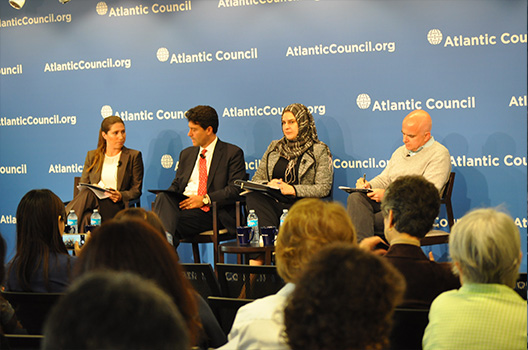 On October 3, 2016, the Atlantic Council’s Rafik Hariri Center hosted “Banding Together: How the World Bank, Humanitarian Community, and Private Sector Support Refugees,” a Middle East Strategy Task Force (MEST) event featuring the US executive director for the World Bank, Dr. Matthew T. McGuire, the associate vice president of the Center for Middle East and Africa at the US Institute of Peace, Manal Omar, and entrepreneur and author Christopher Schroeder. The discussion was moderated by MEST deputy director Dr. Jessica Ashooh, with opening remarks by the Rafik Hariri Center director Ambassador Frederic Hof.

Hof opened the discussion by stating that MEST provides a complete strategy for the Middle East and North Africa region which focuses not only on attempts to influence the future president of the United States, but instead proposes an international strategy for the region. Ashooh also gave brief opening remarks and explained that, unlike other think tank efforts focusing only on security, MEST attempts to take a more holistic approach and identify all of the aspects that need to be addressed for the situation in the Middle East to improve.

McGuire began by discussing the efforts undertaken by the World Bank in the Middle East, especially those pertaining to the refugee situation. He reminded the audience that the primary mission of the World Bank is economic and not humanitarian but stated that a large-scale crisis, such as the one the Middle East is facing today, requires a systemic response, including the World Bank’s global expertise.

With regard to the refugee situation in the Middle East, McGuire highlighted the relationship between how a refugee is treated in his or her host community and the likelihood that the refugee will eventually return home. Counterintuitively, he noted that data shows that refugees who are more economically successful in their host countries are actually more likely to return to their home countries than those who are economically isolated. He noted that personal savings are essential to a person being able to return home to rebuild.

McGuire also explained how the bank is trying to innovate in the face of crisis, and make commonsense exceptions to some of its longstanding rules. For example, he noted the Bank’s recent announcement that it will offer zero-interest loans to Jordan and Lebanon to help those countries cope with the refugee situation—this is an important change because, as medium-income countries, both Jordan and Lebanon would have been disallowed access to such loans under previous Bank rules.

Ashooh then turned to Manal Omar to respond to McGuire’s remarks from the point of view of someone who works closely on humanitarian and community reconciliation issues. Omar explained that responses to the crises in the Middle East should draw on lessons learned from previous experiences. She stressed that four civil wars are occurring simultaneously (in Syria, Iraq, Libya, and Yemen), rendering neighboring countries more fragile due to spillover effects. She called for careful thinking and planning in the implementation of temporary solutions, as temporary solutions often unwittingly become permanent. “Nothing is more permanent than a temporary solution—just ask a Palestinian,” she said. Omar also discussed the renegotiation of the social contract in the Middle East that is currently under way. Finally, she concluded by saying that a good indicator of a country’s wellbeing was the condition of its women and its youth.

Ashooh then turned to Schroeder to discuss how new technologies are impacting the refugee situation. He first addressed those who dismiss tools like smartphones as ephemera by noting their ubiquity in the Arab world, where two-thirds of people in the region own internet-connected smartphones. He explained that this allows these individuals to access essentially all the world’s knowledge, for free, even in dire situations like refugee camps. He also mentioned that such access creates tools to build more transparency and accountability in government, and can also provide means for educating people outside of traditional classrooms. According to Schroeder, technology generally helps to enhance the development of bottom-up solutions to many of the region’s most pressing concerns, as it empowers people in new ways.

Ashooh questioned the World Bank’s adaptability to respond to such a crisis since the bank has traditionally favored top-down approaches. In response, McGuire highlighted that the bank disperses many of its loans to private businesses, and is also looking for other avenues through which to interact with groups below the state level.

McGuire also spoke to the economic potential of the Middle East as a region, and noted the important economic roles that countries like Syria and Iraq have traditionally played for their neighbors, acting as both significant markets for exports and as vital overland-transport routes for moving goods throughout the region. He noted that much of this activity will pick up again once the conflicts in these states settles down, helping with economic recovery.