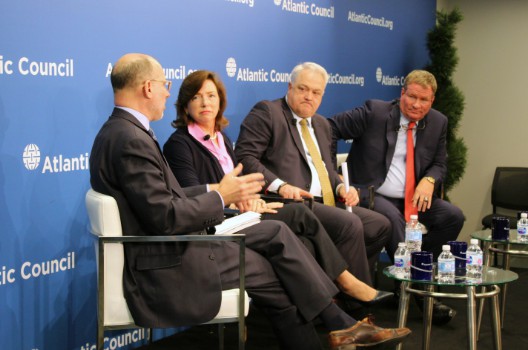 On April 4, the Atlantic Council hosted a public event on “Big Small Companies: How Size Matters in Defense Contracting.”

This event is featured within the Atlantic Council’s Captains of Industry Series, which is a platform for senior executives in aerospace and defense to address the public interests their companies serve and the public policies that shape these markets. The panelists discussed challenges and opportunities of small and medium companies in defense contracting, as well as issues in relations between private companies and public military and governmental agents.

Frank Finelli is the managing director of The Carlyle Group, a global private equity firm, where he focuses on investments in the defense and aerospace sector. Previously, Finelli served as legislative assistant for then-Senator Dan Coats (R-IN). Before retiring as an Army Lieutenant Colonel, Finelli served as a Special Assistant to the Chairman of the Joint Chiefs of Staff for the first Quadrennial Defense Review. A Field Artillery Master Gunner, Finelli served in the 82d Airborne, 1st Armored, and 3d Infantry Divisions. Before that, he was an associate professor of economics at the US Military Academy.

Bradley Feldmann has served as president and chief executive officer of Cubic Corporation since 2014, and was elected chairman of the board in 2018. He oversees the operations of Cubic’s three business divisions, Cubic Transportation Systems, Cubic Global Defense and Cubic Mission Solutions, implements management and operation processes, and provides overall strategic vision for the corporation. As president and CEO, Feldmann has led several innovation initiatives, such as the implementation of IdeaSpark. Under Feldmann’s leadership, Cubic took important steps to transform the company’s global IT infrastructure into a scalable, efficient and effective system through the rollout of the Global Enterprise Management initiative.

Andy Hove is the President and CEO of AM General. He has over twenty-five years of experience in defense and aerospace manufacturing organizations. He is also a former US Army officer who served in a wide range of operational, command and staff assignments. Hove has held management and executive positions with HDT Global, Mistral Group, Oshkosh Defense, BAE Systems, United Defense, FNSS Defense Systems, and Vinnell Corporation. He has led a wide range of programs and business in the defense, security, and aerospace sectors. His international background includes assignments in Germany, Saudi Arabia, and Turkey.

Barbara Humpton serves as president and CEO of Siemens Government Technologies, a federally-compliant US organization and leading integrator of Siemens’ innovative products, technologies and services for programs and requirements at federal government agencies and departments. Prior to joining Siemens, Humpton served as a vice president at Booz Allen Hamilton where she was responsible for program performance and new business development for technology consulting in the Department of Justice and Department of Homeland Security. She also was a vice president at Lockheed Martin Corporation with responsibility for Biometrics Programs, Border and Transportation Security and Critical Infrastructure Protection.