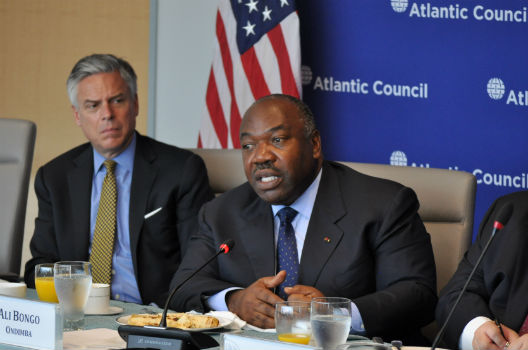 On Thursday, March 31, the Africa Center hosted a breakfast in honor of His Excellency Ali Bongo Ondimba, President of the Gabonese Republic.

In his remarks, President Bongo Ondimba provided an update on the country’s economic situation, focusing specifically on the positive impact that the African Growth and Opportunity Act (AGOA) has had on the diversification of the Gabonese economy and that of other African countries. He also outlined his government’s push to balance industrialization with environmental preservation. Additionally, President Bongo Ondimba noted that importance of US-Gabonese cooperation on security issues as they pertain to conservation efforts, drug trafficking, and maritime security in the Gulf of Guinea. Finally, he touched on the upcoming presidential election in Gabon, noting that he will be seeking a second term based on his record of accomplishments in his first mandate.

During the discussion, the President also called for increased international—especially American—investment in his country, singling out the energy, agribusiness, and service sectors.

A full transcript of the President’s remarks can be found below.