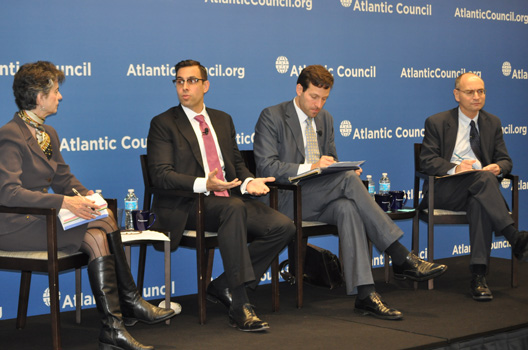 On December 2, 2014, the Atlantic Council hosted an event focused on the failure of negotiators to conclude a comprehensive nuclear agreement with Iran last month and the decision to extend an interim accord for another seven months. Moderator Barbara Slavin, Senior Fellow at the Atlantic Council’s South Asia Center, guided a panel discussion on issues including domestic obstacles to a deal in the US Congress, internal Iranian political differences over the virtues of an agreement, the role of Russia and the durability of sanctions over time.

Regarding Republican opposition to a potential agreement forged by the Obama administration, panelist Erich Ferrari, attorney at Ferrari and Associates, P.C., warned that Congress is capable of passing legislation that will further complicate efforts to reach an agreement with Iran and seek to frustrate President Barack Obama’s foreign policy by setting specific benchmarks for reaching a comprehensive deal that may be unobtainable.

The panelists agreed that Iranian Supreme Leader Ayatollah Khamenei regards recognition of Iran’s “rights” to civilian nuclear power as a matter of self-sufficiency, technological development, and national pride and that he is worried about the political implications of a deal with the U.S. for the survival of his regime. Slavin noted that the dire state of the Iranian economy is putting pressure on the Iranian government to agree to a framework deal, saying “the Iranian currency continues to drop… revenues are frozen, and oil prices are falling.” Panelist Clifford Kupchan, Chairman of the Eurasia Group, responded by explaining how gaining support for a deal from conservatives within Iran may depend on how their economic interests are affected. Kupchan said at the moment Iran lacks sufficient political will to reach a final deal, but it remains to be seen if this is because President Hassan Rouhani wants to push for a better deal or because hardliners have established red lines that the international community cannot meet. Meanwhile, Cornelius Adebahr, a Europe Program Associate at the Carnegie Endowment for International Peace, said the mood in Tehran is currently upbeat about negotiations. However, ordinary Iranians believe that if President Rouhani fails to reach an agreement, Iran will be vindicated in its nuclear ambitions because of the West’s unwillingness to compromise.

Kupchan asserted that Russia doesn’t want a nuclear Iran, as it could result in a war in their “back yard” with the US and Israel. He said Russia is perhaps the most constructive member of the P5 +1 – (United States, United Kingdom, France, Russia, China, plus Germany) as a facilitator of negotiations, but noted Russia is acting in its own national interest, not doing the West a favor. Adebahr added that the public image of Iran engaging with Russia is intended to project an alternative to operating within the Western-dominated international financial system. Kupchan said “the issues of centrifuges and sanctions relief” is what the conversation will eventually rise or fall upon.

Slavin noted there is a minority view in Iran that it should develop a full-fledged nuclear weapons program, which would eventually gain acceptance and ultimately result in sanctions being lifted. However, “if no deal is reached and Iran keeps enriching to 20% and beyond, then Israel will start making noise about taking [military] action.” To reach a deal, Adebahr said the goal should be “Iran only produces what it needs for a civilian nuclear power program, so that Iran doesn’t have any excess material to divert for another reason.” Kupchan said, “My own view is what you really need is a centrifuge inventory. It’s a difficult demand for the West to make, but doable.” On reaching a compromise on centrifuge numbers, Kupchan proposed moving the majority of Iranian centrifuges to a remote location, maintaining ownership of their operation while enriching uranium under international supervision. Kupchan also said it was possible that the interim deal would be repeatedly extended to avoid hard choices by either side. This would be a “JPOA forever” scenario, he said, referring to last year’s interim accord, known as the Joint Plan of Action.