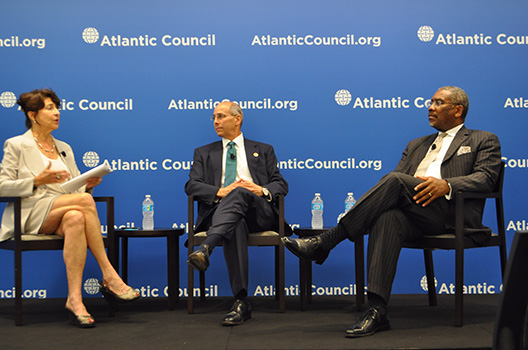 The Trans-Pacific Partnership (TPP) has the potential to create sustainable economic growth, spur job creation, and deepen geopolitical ties between market-based democracies across the Americas and the Asia-Pacific. In tandem with the Transatlantic Trade and Investment Partnership (TTIP) that the United States is negotiating with the European Union, TPP has the potential to write the new rules of the road for a fast-changing global economy.

On Wednesday July 23, the Atlantic Council’s Adrienne Arsht Latin America Center and its Global Business and Economics Program hosted an event to launch a new report, entitled Bridging the Pacific: The Americas’ Next Economic Frontier?, which analyzes the commercial and strategic opportunities for the United States, Latin America, and partners across the Asia-Pacific region from TPP. Congressmen Charles Boustany, Jr. (R-LA) and Gregory Meeks (D-NY), Acting Deputy US Trade Representative Wendy Cutler, and other experts from the public and private sectors came to the Council’s headquarters to discuss the findings of the report.

Despite a number of potential benefits, the future of TPP remains in question while the United States continues to negotiate agricultural market access issues with Japan and election year politics keep Trade Promotion Authority (TPA) on hold in Washington.

Congressmen Boustany and Meeks repeatedly underlined the importance of passing TPA and deepening US trade and investment ties with international partners. The two members, representing vastly different urban and rural districts, agreed that TPP represents a key chance for the United States to improve its standing abroad and create jobs here at home. Congressman Boustany stated that “we’re not going to settle for anything less than a really strong deal,” which creates opportunities for all Americans and all industries. Meeks followed by saying that “TPP can help level the playing field with countries like China and create a rules-based global trading platform.”

Acting Deputy US Trade Representative Wendy Cutler reminded the audience that there are many concurrent efforts to open markets and increase trade in the world, but “only TPP promises to bridge the Pacific and unlock economic growth potential and create jobs across the Americas and Asia.” Further, she stressed the importance of the “twenty-first-century” trade agreements the United States is pursuing across both the Atlantic and Pacific which encourage and strengthen high product safety, environmental, and labor standards in addition to removing traditional barriers to trade and investment.

Finally a panel of experts discussed the report’s recommendations to move TPP forward and its prospective benefits for the United States, Latin America, the private sector, and consumers.

The report’s author, Peter Rashish, suggested that President Obama and his administration must do a better job of clearly explaining the economic and strategic benefits of a robust TPP agreement: “If policymakers take clear and concrete steps to negotiate an ambitious agreement and explain its benefits, the United States will expand its leadership role.”

Kenneth Smith Ramos, director of the Trade and NAFTA Office at the Mexican Ministry of the Economy, added that TPP represented a clear opportunity for Mexico and the other Latin American member-countries—Peru and Chile—to position themselves as rule-makers rather than rule-takers as the global economy evolves. The agreement will also allow Latin American countries to deepen their engagement with fast-growing partners in Asia.

Ralph Carter, managing director of Trade and International Affairs for FedEx, underlined TPP’s opportunities for small and medium enterprises as well as consumers. By simplifying rules and requirements for complying with a confusing constellation of existing agreements, TPP will make it much easier to do business across the Pacific—creating jobs and adding choices and value for customers.

Finally, John Melle, the assistant US trade representative for the Western Hemisphere, highlighted TPP’s potential to elevate Latin America’s role in shaping global trade policy, while also adding a new dimension of integration between like-minded partners who share the United States’ views on high-standards and the free-market democratic model.