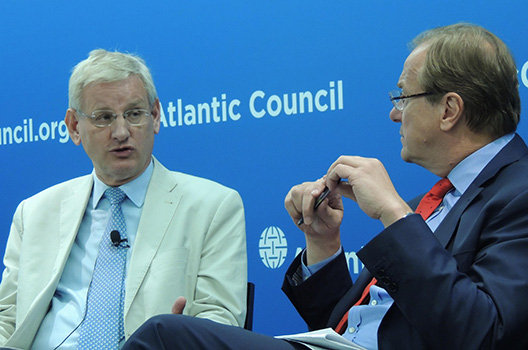 During his July 8 visit to the Atlantic Council, Swedish Foreign Minister Carl Bildt declared that “these are not easy times” for the transatlantic partners, as they face “a more assertive China,” new areas of terrorism threatening Africa, and a Middle East “engulfed by new sectarian divisions.” Speaking to a packed audience of foreign policy experts, scholars, diplomats, and media, Bildt singled out a revisionist Russia as a particular threat to Western values and security. While, on the centennial of the First World War, the world is “not sleepwalking into disaster,” the United States and Europe must remember the lessons of 1914 in addressing the challenges confronting the transatlantic community.

Bildt, who has served as Sweden’s foreign minister since 2006, has been an active player in the European Union’s efforts to diffuse the Ukraine crisis since February. Alongside Germany’s Frank-Walter Steinmeier and France’s Laurent Fabius, Bildt helped secure the February 21 agreement that nearly ensured a peaceful political transition in Kyiv. Nevertheless, following Ukrainian President Viktor Yanukovych’s violation of the settlement and subsequent Russian intervention against its neighbor, Bildt has worked to uphold Ukrainian sovereignty and deescalate the situation.

On Tuesday, Bildt reiterated the importance of the principles laid out in the Charter of Paris of 1990, which enshrined each nation’s right to choose its own future, to resolve disagreements through dialogue, and reject the alteration of borders through force of arms. The West has steadfastly supported an international order based on these pillars, and will maintain them despite the Russian Federation’s actions.

Bildt emphasized a few key points in his remarks: