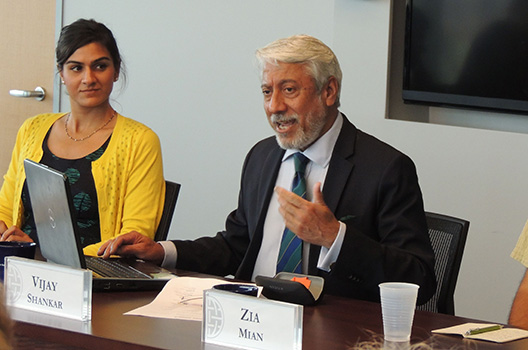 In a discussion with the Atlantic Council’s South Asia Center, Vijay Shankar, a retired vice admiral of the Indian Navy, defended India’s “No First Use” doctrine calling it a pillar of India’s nuclear policy. In his remarks, Vice Admiral argued that India’s nuclear program was designed as a political tool and remains a deterrent to war. Shankar warned of the conventionalization of nuclear weapons, stating “if there are no means to avoid escalation or limit causalities, the whole idea of warfare is lost.” He reaffirmed Indian civilian command and control authority over the use and deployment of its nuclear arsenal, stressing that the decision to develop nuclear weapons was not an Indian military directive.

Zia Mian, a physicist and nuclear policy expert at Princeton University, provided a different perspective. Mian countered Shankar’s criticism of Pakistan, suggesting that opacity and ambiguity are “part and parcel to nuclear strategy.” He argued that Pakistan is not perverse in limiting information on its nuclear program, and questioned India’s record on transparency. Mian suggested that India follow the lead of the United States, France, and the United Kingdom by publicly announcing the number of Indian nuclear weapons, increasing the transparency of India’s nuclear arsenal. However, Mian urged caution in criticizing nuclear policies. In South Asia especially, policymakers face the dilemma that their own polices appear logical while opponents’ policies are irrational and problematic. Mian recommended instead an examination of the factors that cause nuclear policies to diverge, while Shankar warned that the continued proliferation in the subcontinent will undoubtedly impact posture and engagement.