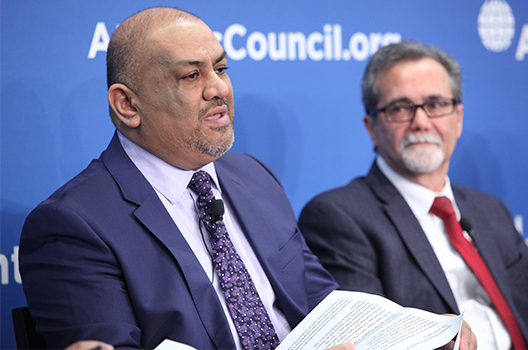 In his opening statement, H.E. Alyemany discussed the passing of UN Security Council Resolution 2216, which called for an end to violence in Yemen. He said that the resolution grants legitimacy and validity to the overall peace process and claimed that it is the only realistic approach to restoring a functioning Yemeni government. He expressed concern that former US Secretary of State John Kerry’s intervention in Yemen was at odds with the resolution’s goal to facilitate the peace process. Alyemany called on UN member states, and especially the five permanent members of the UN Security Council (China, France, Russia, the United Kingdom, and the United States) to allow UN facilitators to assist the peace process in Yemen without interference. He added that Iranian and Russian involvement in general, and Iranian support of Houthi coalition forces in particular, could continue to change the dynamics of the peace process. Alyemany later added that there remains an obligation to return the legitimate government to Yemen, which he said has been “kidnapped” by pro-Iranian militia forces.

Al-Dawsari presented a micro-level examination of the Yemeni conflict, with particular attention to tribal dynamics and affairs at the local level. She noted that deep resentment persists among the majority of Yemenis toward negotiations and peace talks. Many Yemenis distrust and feel unrepresented by the actors that, in their view, are participating in peace talks for the power, or to prolong the war for their own benefit. Al-Dawsari argued that, moving forward, peace talks should address the underlying grievances held by the majority of Yemenis towards the country’s elites. She noted that, thus far, peace talks have selectively concentrated on the power struggle in Yemen and not on the country’s fundamental problems. She urged the incorporation of tribal leaders and local actors into the negotiations, as these individuals also have agency and a stake in the outcome. Al-Dawsari concluded that without this integration, conflict will continue in Yemen.

Alyahya discussed the role of coalition forces in Yemen as well as Saudi objectives and Iranian influence with regards to the Yemeni peace process. He stated that, despite various misconceptions, Saudi Arabia prefers stability in Yemen, and this is why the Kingdom has helped broker peace deals. With regards to the new Trump Administration, Alyahya assessed that Saudi Arabia will push for increased US intelligence in Yemen as well as additional political and logistical support. Alyahya suggested that Iran will likely test the Trump Administration in the coming months in order to gauge President Donald Trump’s responsiveness and flexibility on key issues. Alyahya went on to examine the role of Iran in Yemen, especially regarding Iranian support of Houthi forces. He noted that despite Iranian provisions of weapons, funds, and training, the Houthis still maintain a level of autonomy from Iran. Alyahya later added that there is a frequent overestimation of the capability of Saudi actions to have an on-the-ground impact in Yemen, which has the adverse effect of removing agency from Yemeni actors.

Khoury stated that there are three levels by which to view the Yemeni conflict: local, national, and international. He added that the national level remains critical, and has been since former Yemeni President Ali Abdullah Saleh was ousted from his position and consequently left a void in Yemeni politics. Khoury added that this void has contributed to the ongoing power struggle in Yemen and noted the particular stakes in the conflict held by Saudi Arabia, Iran, and the United States. With regards to the United States, Khoury asserted that US interests have not been “Yemen-centric,” but have instead focused on countering terrorism and Iranian influence. He explained that all of the United States’ objectives in Yemen have not been aimed at guaranteeing security and prosperity in the country and that local, national, and international approaches have all failed to incorporate a “Yemen first” approach. Khoury went on to say that peace processes thus far have not empowered tribal forces, and that, moving forward, tribal mediation is vital to the final outcome of peace in Yemen. Khoury also cautioned policymakers and government actors from designating the Houthis as “terrorists,” claiming that this would be counterproductive as it would likely increase military presence and decrease diplomatic efforts.