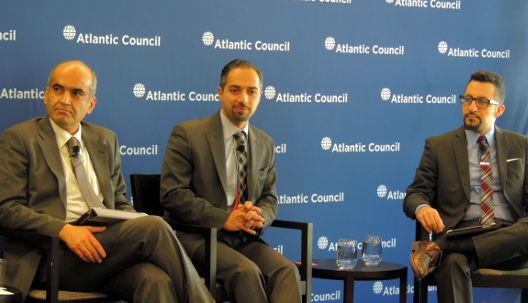 The authors of a new National Iranian American Council report — “Extending Hands and Unclenching Fists: Reorienting Iran’s Outlook Beyond the Nuclear Deal” — spoke at the Atlantic Council regarding ways forward for the US-Iranian relationship in the aftermath of the November 24 nuclear agreement reached in Geneva.

Bijan Khajehpour, managing partner at Atieh International, provided context regarding failed attempts at rapprochement in 2001, 2003 and 2005 which led to more hardline elements taking power in Iran. Those same elements are in retreat now but waiting for this latest agreement to fail, he said. Trita Parsi, president of the National Iranian American Council, said that while the shift of the political pendulum in Iran towards moderation was the result of a series of happy accidents, Washington should do what it can to prevent the pendulum from swinging back. Reza Marashi, research director for the National Iranian-American Council, argued that the best approach would be collaboration, specifically in science and technology, and listed several potential areas including promoting green energy and curbing air pollution. Iranian hardliners argue that the United States wants to prevent Iran from scientific advances and development. Collaboration in science and technology would fly in the face of the hardliners’ narrative, particularly if done with the explicit support of the US government. According to Marashi “the time will never be any riper than this” to lay the groundwork for an improved US-Iran relationship.