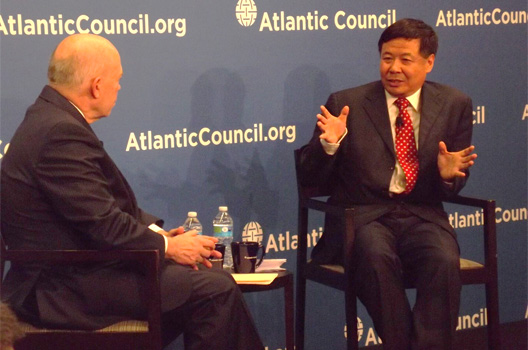 On April 17, the Atlantic Council welcomed the People’s Republic of China’s Vice Minister of Finance, Zhu Guangyao, for an address on “China’s Vision for a More Prosperous Asia-Pacific Region.” This event was hosted as part of the council’s Project on Shaping the Asia-Pacific Future, housed in the Brent Scowcroft Center on International Security, and provided a great deal of insight into China’s perspective on regional development, and the motivations behind recent initiatives like the Asian Infrastructure Investment Bank (AIIB).

Mr. Zhu began his address by highlighting the interconnectedness of US and Chinese interests and relations. With over $250 billion in trade between the two countries, the Vice Minister declared that the development of one side contributed to the development of the other, and described what he sees as a shared interest in peace and development, which will be critical to continued relations.

The Vice Minister than addressed issues related to the current international financial architecture, and China’s relationship with these institutions. Specifically, Mr. Zhu declared that China is a key member of the Bretton Woods System, and a strong supporter of the institutions of the International Monetary Fund and the World Bank. Consequently, China is a strong supporter of reforms designed to enhance these institutions and give developing countries a greater voice, with the ultimate goal of promoting global stability and economic development. Indeed, given the success of project development within China, China has itself become a donation country, making increasing contributions to the World Bank in order to support the global poverty reduction process.

The Vice Minister thus stated that the development of the AIIB was not a challenge to the current international financial architecture. Instead, the creation of the AIIB was motivated purely by severe gap between the demand for infrastructure demand and the supply of investment capital. Mr. Zhu expressed his hopes that the AIIB would work together with the World Bank and Asian Development Bank, though he noted that the AIIB’s focus would be purely on infrastructure rather than social development. He also reiterated the point that the AIIB is open and inclusive, and expressed his expectation that in the coming months, initial negotiations would see the rule of law included as an integral part of the bank’s founding mandate.

Mr. Zhu concluded his comments by looking forward to the opportunities for cooperation and agreement presented by President Xi Jinping’s upcoming visit to Washington. Scheduled for September, this meeting between President Obama and President Xi represents an opportunity to build on the progress made at the previous California summit in 2013, and reach concrete agreements on a variety of subjects, including American and Chinese goals for emissions reduction ahead of the United Nations Climate Conference in Paris.

Mr. Zhu’s address was followed by questions from the audience, which touched on a variety of subjects, from Taiwan’s potential involvement in the AIIB, to China’s expectations for the conclusion of negotiations on the Bilateral Investment Treaty.