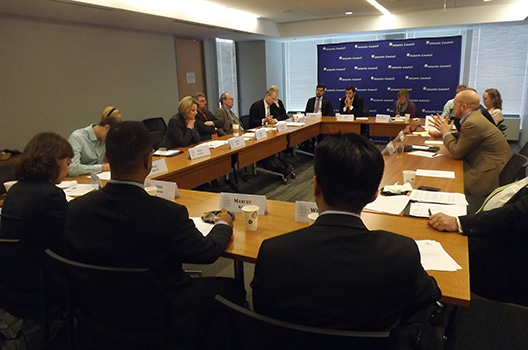 The workshop began with a panel discussion on climate change and defense. This panel proved to be very constructive in illuminating the history of the American military and security communities’ engagement with environmental issues, and how climate change is informing present day security and military policies. Much emphasis was placed on the need for long term climate conscious planning and climate resilient infrastructure, given the cost projections, material and human, we have seen regarding unprecedentedly severe climate events.

This was followed by a second panel discussion on the state of the climate conversation in Washington. This discussion proved equally useful, exploring not only the struggles involved with navigating the politically divisive issue of climate change, but potential strategies and topics that have proven effective in achieving positive policy outcomes. While emphasizing the national security component of this issue was highlighted as an effective means of moving the climate debate forward, participants agreed that this tactic’s potential was ultimately limited. Stating the impact of severe weather events and climatic shifts on individuals and communities was more likely to shift the opinions of policy makers and voters in the long run.