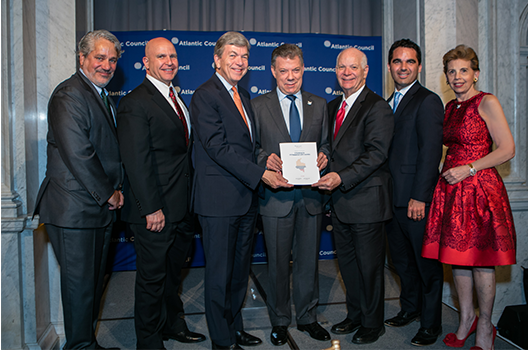 After almost twelve months of consultations and deliberations, the Atlantic Council’s Adrienne Arsht Latin America Center launched on May 17 the Colombia Peace and Prosperity Task Force report: A Roadmap for US Engagement with Colombia. It was the culmination of the work of a notable group co-chaired by Senators Roy Blunt (R-MO) and Ben Cardin (D-MD), who strived to provide a roadmap for US engagement with Colombia going forward. The goal was to keep the focus on the US-Colombia partnership as the country implements peace and agenda items compete for priority in the new US administration.

The center launched the task force report at a private dinner with Colombian President Juan Manuel Santos at the Library of Congress. Ltg. Gen. H.R. McMaster, US National Security Advisor to the President, and John F. Kelly, US Secretary of Homeland Security, as well as task force co-chairs Blunt and Cardin, were in attendance. The dinner also brought together members of the task force, high-level US and Colombian public and private sector leaders, civil society representatives, the diplomatic and the press corp.

Following a welcome by Atlantic Council President and CEO Frederick Kempe and opening remarks by Jason Marczak, Director of the Latin America Economic Growth Initiative at the Adrienne Arsht Latin America Center, Juan Carlos Pinzón, Ambassador of Colombia to the United States, and Kevin Whitaker, Ambassador of the United States to Colombia, provided special remarks, touching on the mutual prosperity the relationship has brought the two countries.

Ambassador Pinzón opened the night’s discussion by highlighting that “this is a new era of cooperation to confront organized crime wherever it may be, and the recommendations in the report will guide us.” He noted that “wisdom, knowledge, and hope in the report is exactly what is needed for Colombia to succeed.”

Ambassador Whitaker went on to say that “reality is complicated but we are all in this together, and our combined efforts will allow for the successful implementation of the peace accord.” He recalled the demonstrations that gave Colombia a second chance at peace, “which showed the desire to work even harder to build a peace accord that includes all of Colombia.”

Peter Schechter, former senior vice president for strategic initiatives and former director of the Adrienne Arsht Latin America Center, moderated a conversation with Senators Blunt and Cardin to discuss report recommendations and the roadmap for US engagement with Colombia.

Senator Blunt affirmed that a transition from Plan Colombia is necessary, and that “we need to build on real policy success to create economic opportunities as we move forward.”

Senator Cardin reminded the audience that “this is our hemisphere and the United States should and must play a constructive role. It is a real challenge to get people to talk, let alone listen to each other, but involvement in Colombia made a real difference.”

President Juan Manuel Santos remarks on the future of US-Colombia relations at the May 17 Atlantic Council Colombia Peace and Prosperity Task Force report launch at The Library of Congress.

The panelists agreed that approving Plan Colombia year by year was never easy, but it was always a bipartisan effort. Applying its lessons to changing times and current realities is a prerequisite to forging a new strategy. At a moment of great promise and urgency, Senator Blunt emphasized that “we have to be vigilant and responsible, and there needs to be measures of accountability for the success of Peace Colombia.” Senator Cardin closed the discussion by affirming that “it is our responsibility and in our best interest to support Colombia, a country that shares our [US] values and our principles.”

President Santos concluded the event with special remarks. His full comments are available here. He stressed that “as uncertainty grows in the rest of the world, the certainty of the strong relationship between the United States and Colombia remains.” This relation works because “we believe in the same goals: a democratic, prosperous and safer Western Hemisphere.”

The president went on to thank the United States for its support in ending the longstanding internal conflict in Colombia. “Colombia is at an inflection point, and there is no moving backwards. We are looking forward to the future, and there is much work to do,” he stated.

Today, Colombia is on the fast track for accession to the Organisation for Economic Co-operation and Development, insecurity has fallen dramatically, and millions have been lifted out of poverty. Leading indicators show Colombia is on the right path, but “making peace is more difficult than going to war,” President Santos affirmed, adding that “the bond between Bogota and Washington goes beyond who sits in the White House and in La Casa de Nariño.”

Confident that President Trump and his administration recognize US-Colombia engagement has been a winning asset for the United States, the president concluded, “he better than anyone knows how to recognize a good investment.”