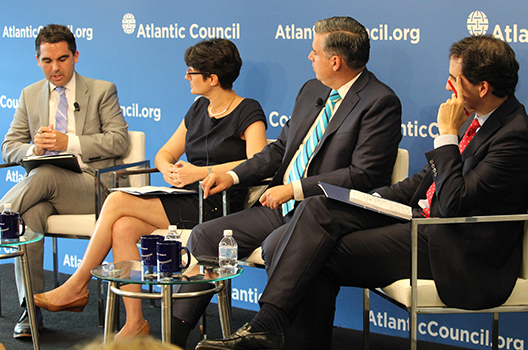 On Tuesday, June 19, the Atlantic Council’s Adrienne Arsht Latin America Center hosted an event titled, “Colombia’s Vote: The Road Ahead for Iván Duque.” The event brought about a rapid reaction discussion to Iván Duque’s victory over Gustavo Petro in the Colombian election held on June 17th. The speakers touched on a range of topics, including the growing polarization in Colombia, the future of the peace accords, the neighboring crisis in Venezuela, and prospects for the Colombian economy.

Marczak opened the event by introducing the panelists and contextualizing the conversation in light of the election. He noted how the election was historic, with 8 million votes going to a left-wing candidate and the selection of the first female vice-president. Next, he set the agenda for a discussion on the challenges that Duque will likely face as president, including the implementation of the peace agreement with rebel guerilla forces, the neighboring crisis in Venezuela, the increase in coca cultivations, and the road to economic growth and continued relationship with the United States.

In a conversation about takeaways from the election, Dieste noted how people voted for change, as evidenced by populist proposals on the left and right of the political spectrum. Meanwhile, López described how he found it remarkable that the elections took place without significant violence or security incidents, which have been a staple of the electoral process in Colombia in the past. He held that the calm surrounding the process, and the speed in which the results were revealed was a sign of maturity and positive change for the Colombian democracy.

González, in turn, analyzed the tone of the election, observing that they were a sign of people being fed up with the polarization and politically questionable practices of the Colombian political establishment. He also questioned how Duque would put into practice his visions of unity, considering the geographic distribution and socioeconomic realities of those who voted for Petro.

Marczak alluded to Duque’s victory speech in which he pledged to “turn the page on the politics of polarization, insults, and venom,” to which López responded that to build bridges and heal wounds, Duque would have to address the opposition’s concern for inequality in the country.

Similarly, González lauded the conciliatory and unifying tone of Duque’s acceptance speech but cautioned that to reaffirm his promise of unity, he would have to be mindful of who he appointed to his cabinet and how he structured and prioritized the budget.

When asked about the discourse surrounding the peace accords, specifically the debate around transitional justice, Dieste pointed out that in her experience conducting interviews throughout the country, “many victims are not looking for revenge, they are just looking for the truth.” She added that Duque would be in a unique situation, having to appease both voters who fear that altering the accords will throw peace into disarray and voters who want to see modifications surrounding justice for the victims and guerrilla leaders.

Speakers were also asked about how the Duque administration will handle areas in which the state has been absent for decades so that they can reap peace dividends. González suggested it would depend on the course of the peace accord’s implementation and whether potential investors could be assured that they would not run into security issues in the future.  He expressed with concern how the ELN has been disruptive to the energy sector and as such the Duque administration would have to be careful of the repercussions that altering the peace accord could have on negotiations with the ELN.

With respect to Colombia’s relationship with the United States and how the growing coca cultivation was becoming an issue of concern for Congress, López spoke about how Duque’s ties to Uribe, with whom the Washington community is familiar, would provide a stable foundation for the continuation of US- Colombia relations. He also pointed out that Duque would be willing to go back to the aerial fumigation of crops if they find a chemical that is not harmful to the environment.

The panel also discussed avenues for economic growth in Colombia. González noted that the oil price shock hit Colombian economy like a “massive meteorite.” However, the country readjusted, and he applauded the decrease in unemployment, low inflation rates, and the country’s induction into the OECD, which overall indicate a favorable environment for investments. However, he added that fundamental reforms would need to take place to ensure medium and long-term growth. González recommended that the country focus on building infrastructure, deepening formalization of the economy, and tackling the energy sector. Dieste added that the country should focus on security and ensuring state presence in areas where the ELN has threatened the energy sector.

The speakers then turned to Venezuela. Dieste pointed out that while Duque has vowed to confront the Venezuelan regime, this will be a challenge for his administration since they will simultaneously have to deal with a humanitarian crisis whose victims are increasingly seeking refuge in Colombia. González went further in suggesting that thus far, the Colombian government has been able to accommodate the inflows of Venezuelan refugees, but a deepening of the crisis may shift the situation.