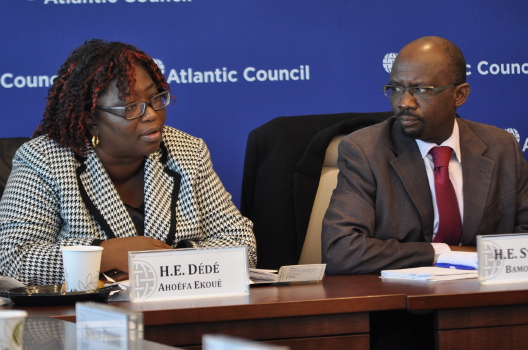 Baba’s remarks emphasized Togo’s success in maintaining its internal stability, while underscoring Togo’s history of forming partnerships to address security problems throughout the West and East Africa regions. He offered as evidence his country’s support of peacekeeping missions in Mali, Guinea-Bissau, Sudan, and Côte d’Ivoire. The minister reflected on Togolese cooperation with the United States to combat the illegal drug and ivory trade, and expressed hope that such partnerships could broaden and deepen in the future.

Ekoué’s remarks expounded the government’s commitment to promoting historically marginalized populations such as women and youth. She outlined Togo’s ambitious poverty-reduction plan, which includes youth employment initiatives designed for the approximately sixty percent of the population under the age of twenty-five, and spoke of the need for greater private sector investment to help the country realize its social and economic goals.

During the question and answer portion of the discussion, the ministers addressed the issue of presidential term limits and constitutional changes to the electoral process, and spoke of the government’s determination to build on the progress it has made fighting corruption and promoting greater government transparency.