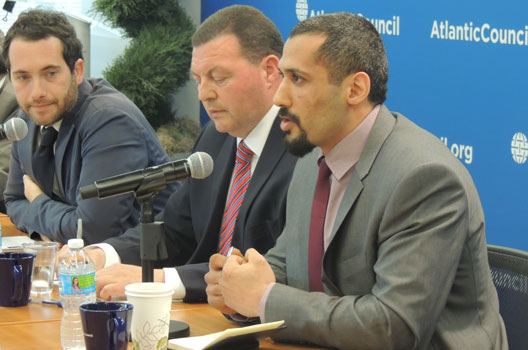 On Wednesday, May 20, the Atlantic Council hosted Dr. Mattia Toaldo, Policy Fellow at the European Council on Foreign Relations, and Abdul Rahman Al Ageli, Cofounder of the Libyan Youth Forum, for a roundtable discussion about the current crisis in Libya. The speakers shared their insights of the nuanced dynamics on-the-ground and Europe’s perspective and response.

Al Ageli began by explaining that recent developments show key differences between the various regions of Libya. While all eyes are on the United Nations-led peace talks, of which many Libyans are critical, local ceasefires and prisoner exchanges demonstrate a desire by some fighting forces to end the conflict. The UN talks have had little to do with these local agreements, according to Al Ageli, who suggested that the negotiation process ought to start at the local level, then move to a national dialogue. This would be followed by a truth and reconciliation commission and conclude with the formation of a unity government, disarmament of militias, and removal of ISIS forces.

Al Ageli also outlined his vision for Libya’s transition. He suggested that a cadre of technocrats would best serve the country’s interests by communicating with the Libyan Central Bank and establishing a proper budget for the unity government to ensure salaries are paid and deficit reduction efforts made.

On the topic of ISIS and extremism, he said that there are few Libyans with direct connections to ISIS proper in Iraq and Syria. Rather, ISIS’s current ranks in Libya are composed primarily of foreigners, especially those carrying out suicide attacks. However, these weak connections are growing stronger. According to Al Ageli, Islamists in Libya fear that, should a unity government form, it will be totalitarian like the current regime in Egypt and conduct repressive, wide-reaching counterterror efforts against them.

Toaldo expressed that he is not optimistic that the UN-led talks will lead to an agreement because Libyan actors view these negotiations as zero sum and this has made it difficult to agree on any power-sharing arrangement. The international community needs to build incentives and mechanisms for the negotiations to succeed.

Speaking about the European Union’s (EU) perspective, Toaldo explained that Europe’s number one concern is that of migrants trying to reach its shores from Libya. But he posed the question as to what kind of on-shore operations the EU can successfully and realistically undertake. The smugglers’ activities are linked to the civil war; thus engaging against the smugglers means the West must engage in the war itself. He suggested that the West can help support local ceasefires in the hope that they culminate into a national ceasefire.
Returning to the issue of financial institutions, Toaldo said that Libyans do not have any sense of urgency to fix it. Large portions of the Libyan people receive salaries, which thus far serves as a stabilizing factor. However, if the financial structure collapses, then the country will experience a rapid increase in violence.

During the question and answer period, Al Ageli said that achieving short-term results will be difficult because of the international community’s limitations considering they no longer have a diplomatic presence on the ground in Libya. He also added that a purely military strategy to fight ISIS in Libya will help the extremist group to recruit, and once the majority of ISIS fighters are Libyan, the situation will become nearly impossible to resolve. Toaldo also observed that sanctions imposed by the West are ineffective and that the weapons ban must be enforced in order to de-escalate the conflict.