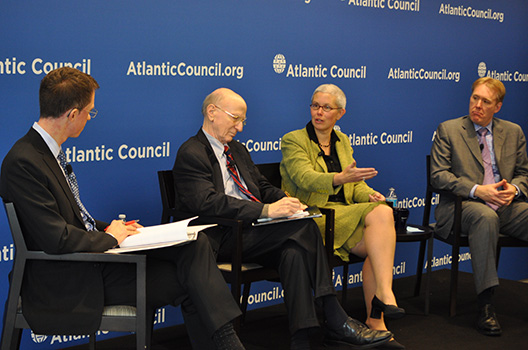 On Tuesday, December 9, 2014, the Brent Scowcroft Center on International Security welcomed Christopher K. Johnson, senior adviser and Freeman chair in China studies of the Center for Strategic & International Studies (CSIS), Sophie Richardson, China director of Human Rights Watch, and Alan D. Romberg, distinguished fellow and director, East Asia program of the Stimson Center for the event titled “Democratic Developments in Asia: Implications of the Hong Kong Demonstrations for Cross-Straits Relations.” The event was welcomed by the Scowcroft Center’s Barry Pavel, vice president and director, and was moderated by David Wertime, senior editor of the Tea Leaf Nation at Foreign Policy. The focus of the event was the current protests in Hong Kong and its implications to the political and social issues in Hong Kong, Taiwan, and China.

In their remarks and the following Q&A session, the panelists focused on the effects of the Hong Kong protests on the city itself, China as a whole, and the political relations with Taiwan. The overarching consensus amongst the panelists was that the idea of two systems in one country is a difficult challenge for the Chinese government. The two systems are the communist system of China and the more independent and democratic Hong Kong, and Taiwan, which China claims as part of its territory. Although the situations in Hong Kong and Taiwan are similar, the panelists did not believe that the protests in Hong Kong were having any major political implications in Taiwan.