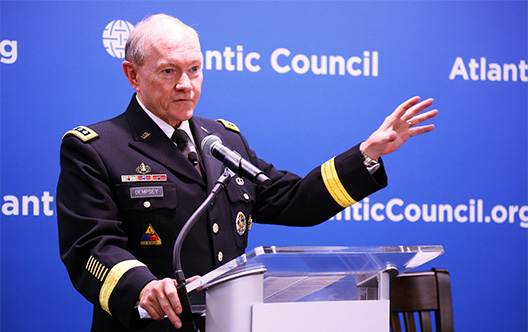 Today, General Dempsey noted, is the forty-ninth anniversary of the founding of the long-defunct Warsaw Pact. Back then, in 1955, he was three years old. In 1975, as he noted, the Dempsey went to Germany to patrol the Czech border as a lieutenant in an armored cavalry regiment. In 2003, he drove into Baghdad as the commanding general of what he called an “exquisite Cold War tank division.” A few weeks later, his corps commander was asking him to “provide security” in a city of seven million people—a task for which he had never trained. And then, in 2014, he found himself asking General Valery Gerasimov, chief of the Russian General Staff, with a touch of humor, whether he was “suggesting that we should end our careers the way we began them.”

That is to say that another Cold War, he opined in response to a question from RIA Novosti, would be the worst-case outcome of Russia’s “extraordinarily unsettling” actions in Ukraine, and other present disruptions in geopolitics. Then again, echoing the title of later panel discussion, the general also asked rhetorically whether there was any other kind of geopolitics. Granted, as General Brent Scowcroft had said in his introduction of the chairman, the strategy of that Cold War was very stable: containment until the Soviet Union changed of its own accord. Globalization hasn’t been working that way, and while Dempsey believes that he has a clear picture of Russian military forces, he admits that understanding Russian intent is another question.

The general also insisted that he was “not pining for that degree of clarity,” but he also observed that new tools are required for dynamically managing a more complex security environment. The United States and its allies face heavyweight competitors (Russia, China), middleweight adversaries (Iran, North Korea), nefarious networks (al-Qaeda, transnational criminals), and the fierce domain of cyber security. As his team wrote in the recent Quadrennial Defense Review, he fears that we will not innovate quickly enough for new challenges.

And yet, despite this political instability—and the focus of our conference!—Dempsey believes that “we don’t need to make disruptive changes.” The United States has a remarkably good military for conflicts large and small. To live within the means of the Budget Control Act, the general believes that the United States needs to lower the cost of its defense, in manpower and excess and infrastructure, and to innovate for greater agility in forward-deploying forces, to provide “dynamic presence” where it is most needed overseas. The military he seeks is one that will “do less with less, but not less well.” And while he and the rest of the Joint Chiefs believe that there is no crisis today, there will be in a few years without that change.

Senior Fellow James Hasik provides some summary thoughts on the keynote address by General Martin Dempsey, chairman of the Joint Chiefs of Staff, at the Atlantic Council’s conference Disrupting Defense: Dynamic Security in an Age of New Technologies.