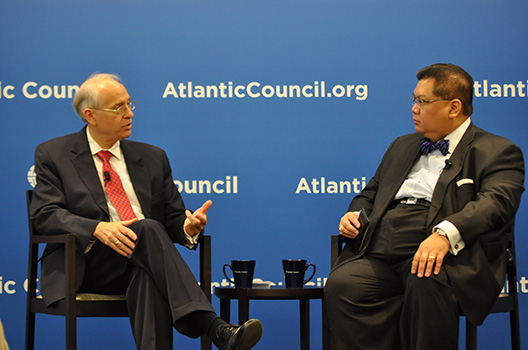 On Thursday, October 9, the Atlantic Council’s Africa Center hosted the Honorable Donald Booth, the US special envoy for Sudan and South Sudan. In his remarks, Ambassador Booth addressed the recent political developments in both countries and articulated significant changes in the US policy towards both nations.

In his welcoming remarks, Director J. Peter Pham reminded attendees that the Africa Center had two years previously hosted Booth’s predecessor, the Honorable Princeton Lyman, in his unveiling of a significant new “roadmap” to guide US relations with the two countries.

Booth began his remarks by assessing the origins of South Sudan’s ten-month-old conflict, noting that it is South Sudan’s bleak history of weak institutions; over-centralization; inadequate and slow security sector reform; corruption and financial mismanagement; and unresolved intercommunal tensions that had effectively set the stage for the unfolding civil war.

Yet Booth emphasized that today’s conflict is primarily the product of the failures of South Sudanese leadership, and he exhorted both the South Sudanese government and the opposition leadership to commit in good faith to a peace process leading to a transitional government. Booth announced in his remarks that the United States is now agnostic in regards to the personalities of the antagonists, and has no predetermined preferences as to who will ultimately lead South Sudan’s transition process, but instead will support all those committed to peace. He further emphasized that the transition must not be designed merely to accommodate South Sudan’s existing elites—those who have caused the current conflict—but should instead be designed to ensure that all South Sudanese communities have a stake in the country’s future through their inclusion in the transition process.

In his remarks on the Sudan, Ambassador Booth effectively extended an olive branch to the regime in Khartoum, recalling that there was a time when cooperation and shared objectives characterized the bilateral relationship. He then affirmed the US government’s current willingness to engage with Khartoum in talks, before calling on all parties to the Sudan’s various internal conflicts to work together to agree upon the terms, timeline, and objectives for a dialogue.

Booth ended his remarks by addressing the still-contentious Sudan-South Sudan relationship. He once again urged both countries to consider the many advantages inherent in delineating their borders and normalizing diplomatic relations, including increased trade and the lessening of violent confrontations. He also remarked that the United States will continue to press South Sudan to honor its commitment to assist Sudan in seeking debt relief per a series of agreements in 2012.

After Booth’s prepared remarks, Pham moderated a Q&A session during which the ambassador emphasized that the US sanctions against South Sudan are not designed to be punitive, but rather to facilitate dialogue and spoke about the importance of inclusivity in any South Sudanese transition process. In his response to a question posed by Pham about the potential for removing Sudan from the US list of “state sponsors of terrorism,” the special envoy noted that the step would require meeting both technical and political requirements, but reiterated the willingness of the US government “to engage the Sudanese in a more frank and frequent exchange,” including discussion of “the full range of issues that frame our bilateral relationship.”