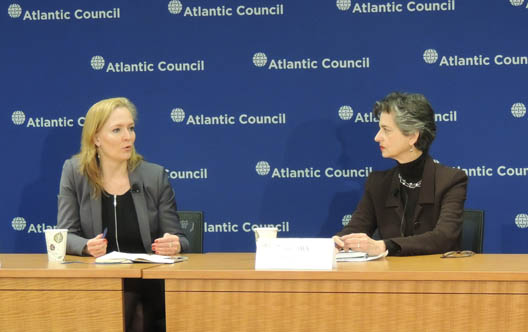 Despite a current political focus on nuclear talks, opening the human rights dialogue with Iran is an essential European Union (EU) priority. Speaking at an Atlantic Council’s South Asia Center roundtable, European Parliament Member Marietje Schaake stressed the need to place human rights at the forefront of the official agenda and to avoid a zero-sum approach to nuclear concerns and human rights in Iran.

Schaake noted that although EU’s approach on engagement with Iran may differ from that of the United States, “in order to achieve the best results, we must be working together in a complimentary way [and] an independent way.”

“I sensed hope and optimism in the streets of Tehran,” Schaake said, noting the new, more moderate government of President Hassan Rouhani. However, she warned that hardliners “still hold a very strong voice and often use this to disrupt efforts.” Understanding this internal battle is important in both the EU’s and the United States’ negotiations with Iran. Hardliners have tightly held onto laws restricting digital freedom in Iran, though many reformist leaders in government actively and effectively use banned social media platforms to spread their messages. “It’s unsustainable if these leaders go on these platforms to not allow the population, one day or another, [to use social media],” Schaake argued.

Another human rights concern under the shadow of the hardliners’ influence is Iran’s use of the death penalty, a particularly contentious issue between the European Union and Iran. Schaake’s conversations suggested a rethinking among moderate Iranian leaders on abolishing the death penalty in drug-related offenses, the leading charge in death penalty cases. Leaving Iran, the European Parliament delegation identified this as a tangible opportunity for changing Iran’s use of the death penalty as a well as to start a broader dialogue on human rights. “It is upon those of us who believe that reforms will benefit the Iranian people to try to do everything we can to make that happen, very well realizing those who seek reform are not the only ones in power in Iran,” Schaake said.