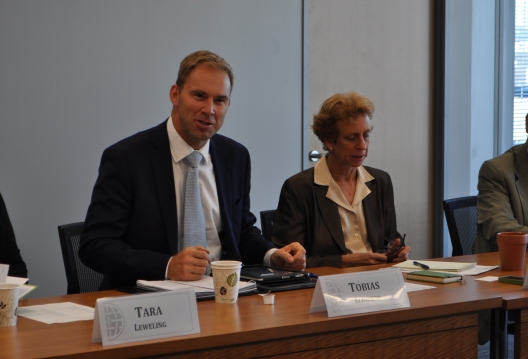 On September 30, the Atlantic Council’s Brent Scowcroft Center on International Security hosted an off-the-record roundtable discussion on the relationship between the United Kingdom and the United States as they face myriad global challenges with Mr. Tobias Ellwood MP, member of the British Parliament for Bournemouth East.
The event touched upon the centrality of the US-UK relationship in a new geopolitical landscape. Both countries are encountering similar issues—including declining defense budgets and divided politics—which portends for a different phase in the strong alliance. Further issues discussed included Britain’s place in the European Union, Syria, demographic changes across the Atlantic, and the 2014 NATO summit due to be held in the United Kingdom.

Mr. Ellwood was elected as member of the UK Parliament for Bournemouth East in May 2005. In January 2006, he was appointed opposition whip and in July 2007 was promoted to the post of shadow minister for culture, media, and sport where he was responsible for a portfolio including tourism, gambling, and licensing. After the May 2010 general election, he was appointed parliamentary private secretary to the defense secretary, the Rt. Hon. Liam Fox MP. In October 2011, Ellwood was appointed parliamentary private secretary to the minister for Europe, the Rt. Hon. David Lidington MP in the Foreign and Commonwealth Office.