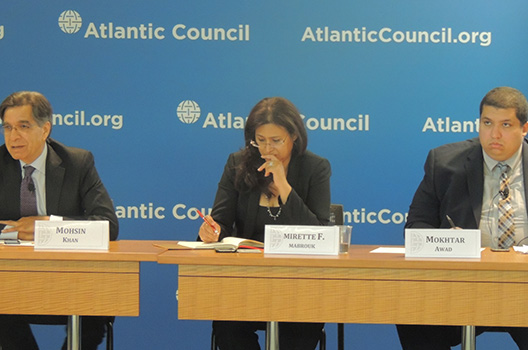 For the past two years, Egyptians have faced electricity shortages resulting in rolling blackouts across the country. Power outages have been hard on households and have also been detrimental to industry, which is operating at only 60 to 70 percent of capacity, constraining an already weakened economy. The issue is not the supply, but rather obtaining sufficient inputs—Egypt’s electricity consumption is only about half of what its megawatt capacity can produce. Electricity is generated mostly by using oil and gas, and depleted foreign reserves mean that the country is having difficulty paying for them. On June 24, 2014, the Atlantic Council’s Rafik Hariri Center for the Middle East hosted Professor Mohamed Sobki from Cairo University, and Mokhtar Awad of the Center for American Progress, together with Hariri Center Senior Fellow Mohsin Khan for a discussion about the potential impact energy shortages may have on the economy and political stability. The panel also addressed how President Abdel Fattah al-Sisi and his government can mitigate the looming crisis. Hariri Center Deputy Director Mirette F. Mabrouk moderated the discussion.


Sobki joined via Skype and opened with his assessment of the energy bottlenecks that have led to the current shortages. He emphasized the impact subsidized energy has had on increasing domestic consumption and lowering production, as well as arrears to international oil companies (IOCs), smuggling and threats to disrupt electricity networks. Sobki noted that Egypt has no plans for energy conservation, and the increased use of fossil fuel as the primary source for generating energy is just one indication.

Awad focused on the security dimension of Egypt’s energy crisis and drew his analysis from media coverage in Egypt to highlight the severity of the problem. With energy blackouts lasting up to twelve hours in some areas, Egypt has seen a rise of protests in industrial towns of Damietta, al-Mahalla, and al-Kubra. Awad observed a spike in attacks against electricity stations and their employees as a way to call attention to the issue. Awad concluded that energy shortages were a problem under President Morsi and continue to pose a risk to Sisi’s presidency.

Khan addressed the economic costs of energy shortages and outlined three immediate economic problems Sisi must tackle, including energy shortages, external financing, and reining in public finances in the short term (one year) to turn the economic situation around. He outlined the financial causes of the crisis and offered short- and long-term recommendations to resolve the energy crisis. In the short term, Khan suggests that the Egyptian government adjust the price for energy by reforming energy subsidies, eliminate payment arrears to IOCs, and obtain gas and oil from Gulf Arab countries (possibly in the form of grants or on a deferred payment basis). In the long run, Egypt will have to build LNG import facilities, complete power station projects, develop infrastructure to utilize renewable energy sources, and encourage energy conservation.