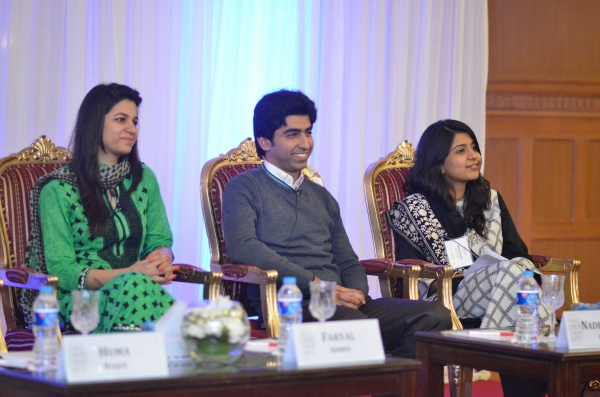 Pakistan is a young and increasingly urban society, which lends tremendous opportunity for progress through its demographic dividend. The youth, who account for nearly 60 percent of Pakistan’s population, will ultimately determine Pakistan’s future course. To help empower these young people in Pakistan, the Atlantic Council’s South Asia Center launched the Emerging Leaders of Pakistan fellowship program (ELP), which seeks to identify and support the country’s next generation of civil society leaders through the creation of a collaborative and proactive network. In early February, ELP convened the first face-to-face meeting between the 2012 and 2013 fellowship classes in Islamabad, Pakistan. A panel discussion entitled, “Banking on Youth: Pakistan’s Changemakers” featured three 2013 fellows: Faryal Ahmed, Huda Ahmed, and Nadeh Ali Mir. The conversation highlighted their ongoing work and vision for the engagement of Pakistan’s youth, while addressing issues such as education, entrepreneurship, and national development.

Faryal Ahmed highlighted the influx of youth entering the labor force every year and the need for enterprising youth in Pakistan. Pakistan ranks 110 out of 189 countries in ease of doing business. Many hurdles face nascent businesses and potential entrepreneurs, such as lack of supportive legal framework, social sanctions in the face of failure, and lack of mergers and acquisitions. Faryal emphasized the need for reforms to strengthen the entrepreneurial ecosystem through recommendations to policymakers based on scientific research and feedback from all stakeholders involved.

Huda Ahmed shared a brief personal account of the moment that first compelled her to leave her career as a dentist to teach in a government school and then continue in the education sector. After telling stories of her own students, Huda noted the sad state of education in Pakistan with statistics that show Pakistan has the second largest number of out-of-school children in the world, and even out of the millions of children who are in school, many cannot do simple arithmetic or read a simple sentence. This leads to an extremely high drop-out rate and a number of other social implications. Huda then talked about the education technology venture that she is a part of, the Reading Room Project, which aims to bridge the achievement gap by providing children the access to online learning resources.

Nadeh Ali Mir presented on the Peshawar Youth Organization, a community service organization that is committed to the cause of raising a wave of thought and self realization in the youth of Khyber Pashtunkwa. Nadeh explained the basic aim of reviving and showing the positive side of the province specifically and the nation as a whole. PYO has worked both in the academia and social circles of the society, with more than 8500 registered members currently.