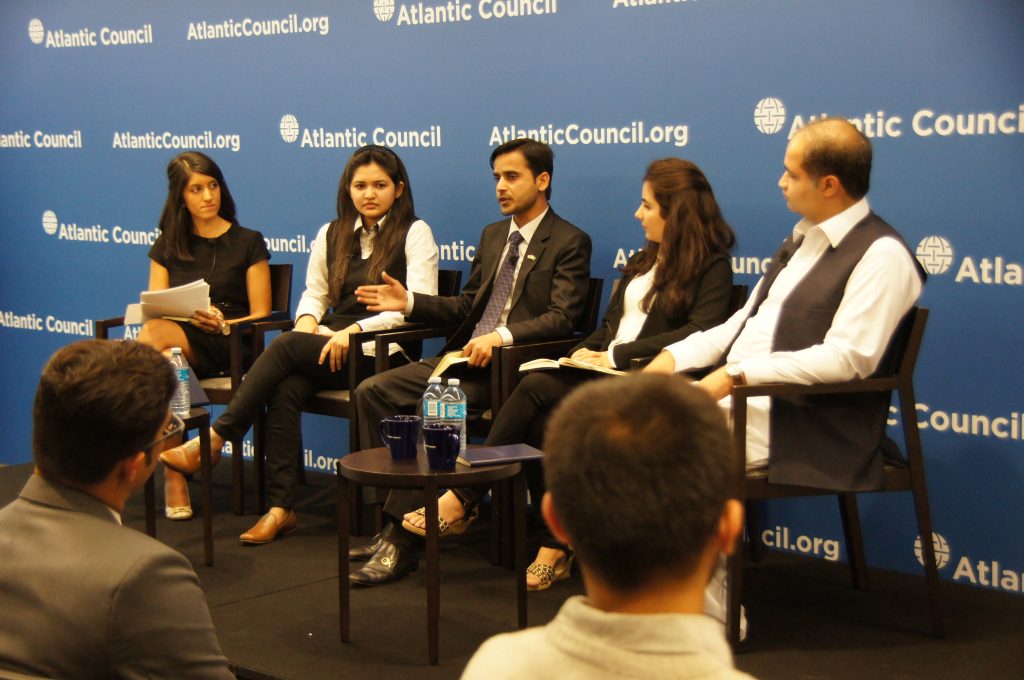 “Yes, Pakistan is facing lots of challenges. Yes, there are flaws in our system,” said Fakiha Ali, one of the Atlantic Council’s 2015 Emerging Leaders of Pakistan. “But if we are positive and try to build something good out of all those negatives, Pakistan would definitely have a great future very soon.”

On Oct. 26, fifteen young Pakistanis, from entrepreneurs and tech innovators to educators and activists, visited Washington under a three-week fellowship from the Atlantic Council’s South Asia Center that seeks to identify, cultivate, and support promising Pakistani youth.

“We want to really empower these young leaders with the practical skills so that they can glean the best practices from the people that they meet and adapt those practices back in Pakistan,” said Nazia Khan, Assistant Director in the South Asia Center.

Their message to the United States: Though it might be facing challenges in issues such as security, minority rights, and education, Pakistan is far from being a failed state – it’s a developing society filled with potential and worthy of investment.

“Pakistan, being a developing country, faces a lot of pressing issues, a lot of chronic problems like illiteracy, lack of infrastructure, and lack of health facilities,” said fellow Syed Azhar Shah.

Shah and other fellows said Pakistan’s front-line position in the US-led war on Islamist militants since the terrorist attacks on Sept. 11, 2001, and the Pakistani government’s reluctance to set development goals have held the country back.

But that hasn’t stopped young Pakistanis from innovating in technology, human rights, and education.

Instead of hunting for a job right out of school, fellow Fatima Rizwan said she wanted to start her own company – only to realize that, with just one incubator center in the entire country, Pakistan lacked a means to help startups kick-off. Rizwan set off to fix that, starting TechJuice, a hub for Pakistan’s technology and entrepreneurial sector.

One year later, Rizwan reported TechJuice has twelve dedicated team members working across the country and has helped a number of startup founders. “It’s a great achievement for us,” she said.

Bhutto, originally a business graduate, opted instead for a career in activism. He figured that the best way to make a difference in his society was to engage with lawmakers upfront — and though, he said, Pakistan’s legislature at first proved to be “rigid as far as change is concerned,” when faced with younger generations seeking change, he feels parliament is starting to realize the potential youth possess for growth and innovation.

A vital issue, fellows agreed, is getting Pakistan’s leadership to recognize the potential of an educated, skilled young populace. Pakistan performs poorly on education: the country ranked 146 out of 187 in the 2013 United Nations Development Programme’s education index, and placed second for number of children out of school in 2012, according to UNESCO.

Though Pakistan’s government has promised to improve education, continued budget cuts on education have signaleddifferent intentions. Fellow Hussain Haider, an activist who advocates for more opportunities in education, warned that Pakistan risked falling behind other South Asian nations if it continued to stall on education and technology reforms.

“Our leaders should finally realize that they have to think in a creative way, because the world has been changed a lot,” Haider said. “If you want to prove yourself as a country, you have to do it economically, you have to have a strong economy and create a strong education system.”

Give Voice to the Voiceless

Non-Muslims have limited opportunities in government and society, and violence against minorities claimed hundreds of lives in the past decade. Earlier this year, a Taliban attack on Catholic churches in Lahore killed at least fifteen.

“The issue that minority [religions] are facing is largely because the state has a one-religion perspective,” said fellow Rizwan Shoukat, who works to promote religious tolerance and interfaith harmony.

“Until the state has separated from religion, minorities will face issues,” said Shoukat. “Know that we have started a movement in Pakistan. I believe, and I have hope, that in the future we will see a more secular and democratic Pakistan.”

Asked what bothered them the most, many fellows were quick to bring up Pakistan’s negative image in the media.

“We’ve been trying to highlight that the perception [of Pakistan] in media is actually quite [different] than the situation on the ground,” said Shah.

In 2011, Pakistan made prominent headlines as the site of the raid by US Navy SEALs that ended in the death of al Qaeda’s leader, Osama bin Laden. Since then, US President Barack Obama’s drone program against militants has kept Pakistan in the spotlight.

It’s a narrative that Shah and others said is false and counterproductive.

“The narrative in media is that everywhere you go, there are always bomb blasts and you cannot walk around or do anything,” Shah said. “It affects us pretty badly; we can’t get investment or expect any clients.”

Ali echoed criticism of the media’s portrayal of Pakistan, calling it one of the biggest obstacles to Pakistan’s further inclusion in the international community. Regardless, she urged Pakistan to push forward with change.

“Whatever we say, first of all, we start blaming our leaders and our system, but I would say that these preconceived notions are the biggest challenges that Pakistan is facing,” Ali said.

“We should always be positive and optimistic, and keep striving for change.”