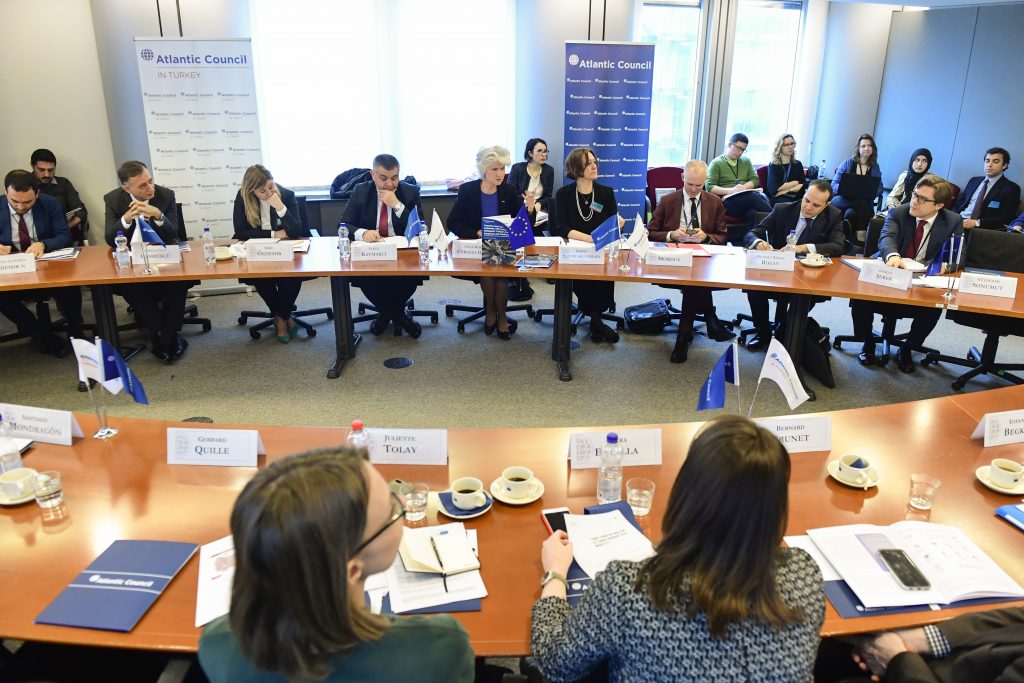 The Syrian civil war, which began nine years ago, has been a continuous tragedy for Syrians. Half a million lost their lives, and around 12 million have been forcibly displaced. Of those displaced, more than six million fled internally, while over 5.6 million went to neighboring countries, which make Syrians the largest refugee population in the world. Neighbouring Turkey has welcomed more than four million refugees from Syria and elsewhere, thus becoming the country hosting the largest refugee population in the world. Turkey has invested significantly to respond to the needs of 3.6 million Syrian refugees living in Turkey, providing them with humanitarian and social assistance, education, health and other services.

After more than a million Syrian refugees reached Europe primarily via the Turkey–Greece sea route and dispersed throughout the continent in 2015, Turkey and the European Union (EU) began a close cooperation to stem the influx of refugees and signed the EU–Turkey statement on March 18, 2016.

On April 9, 2019, a roundtable discussion at the European Parliament in Brussels was held to discuss the implementation of the EU-Turkey statement, the way forward in EU-Turkey relations, as well as the findings of the Atlantic Council IN TURKEY’s refugee report launched in New York in September 2018 during the UNGA week. This discussion was organized by the Atlantic Council IN TURKEY and hosted by Anna Maria Corazza Bildt, member of the EU-Turkey Joint Parliamentary Committee and co-chair of the European Parliament Turkey Forum.

The conference gathered high-level officials from both the EU and Turkey, NGO representatives, business associations representatives, journalists, as well as several international experts. In her welcoming remarks Atlantic Council IN TURKEY Representative Defne Sadıklar Arslan highlighted, the importance of Turkey for the EU, as Turkey is the EU’s 5th largest trading partner and is situated at a very strategic location for European security, a role made even more so evident by the war in Syria. After emphasizing that the cooperation between the EU and Turkey on refugees has disrupted the human trafficking networks and led to a steep drop in deaths over the dangerous Aegean passage from Turkey to Greece, Sadıklar Arslan underlined that “the political solution in Syria is the ultimate and the main objective and should not be overlooked”.

In her keynote remarks, MEP Anna Maria Corazza Bildt underlined the importance of the cooperation between the EU and Turkey on migration, as refugees and migrants are currently the defining issue in the domestic politics of most member states. After reminding that Jordan, Lebanon and Greece seem too have reached their maximum refugee absorption capacity and that currently European countries do not seem willing to do more resettlement from outside or even relocation from within the EU, Ms. Corazza Bildt urged to recognize that without cooperation and partnership with Turkey, the EU would be in a very dire situation. She also underlined that Turkey has no obligation to help Europe as the Syrian crisis, the Iraq crisis, the Afghani situation are not Turkish crises, but rather global crises. Corazza Bildt emphasized that while critics have a legitimate right to question the legal basis of the EU-Turkey Statement, issues of non-refoulement, fundamental rights, child labor, and children abuse and traffic, these need to be raised in a climate of confidence and not in a confrontational approach.

Limak Investments’ Chairperson and Atlantic Council’s International Advisory Board member Ebru Özdemir reminded that the refugee situation in Turkey is not temporary but rather carries long-term implications for Turkey, the region, and beyond, and she underlined the importance for the private sector to be a part of the solution in providing humanitarian needs, as well as supporting refugee resettlement and integration.

Ms. Özdemir emphasized that, with governments addressing the situation at the policy level, the private sector has a critical role to play in providing humanitarian needs, as well as supporting refugee integration through economic development and job creation. Özdemir reminded that, contrary to common public discourse, refugees can – and often do make – significant contributions to the economies of their host communities, as employees, but also as entrepreneurs and job creators, and eventually, to their home countries, as long as they are given the opportunity to do so.

The main purpose of the EU-Turkey statement was to prevent the loss of lives and to dismantle human trafficking networks, but the more glaring reason for the deal was to prevent refugees from reaching Europe. It was agreed that in exchange for Turkey’s cooperation with the EU on curbing illegal migration to Europe (by returning migrants reaching Greece irregularly and taking back irregular migrants intercepted in Turkish waters), the EU would support Turkey with two tranches of 3 billion euros (dispersed through the Facility for Refugees) with projects aiming to address the urgent needs of refugees and host communities in Turkey.

As stressed by the Deputy Director-General for Migration and Home Affairs at the European Commission, Simon Mordue, one of the best measures of achievements of the EU-Turkey statement is reflected by the statistics. Mordue emphasized that through the EU-Turkey Statement, irregular and dangerous crossings have been substantially reduced, which has contributed to saving lives. Thanks to the work with the Turkish authorities, the EU also reduced the chaotic and irregular migration along new routes, in particular as regards to the Eastern Mediterranean route.  Irregular migratory flows decreased from 10,000 arrivals per day from Turkey to the Aegean islands in the peak period of 2015, to a daily average of 88 in 2018.

DDG Mordue stressed that resettlement is functioning well and under the One-for-One mechanism of the Statement, more than 21,000 Syrian refugees in need of protection have been resettled to EU Member States. Moreover, the Commission called on Member States to activate the Voluntary Humanitarian Admissions Scheme as soon as possible. The Scheme will boost the implementation of the EU-Turkey Statement providing Syrians with a safe and legal alternative to irregular migration to the EU. Activating the Scheme soon will boost the implementation of the EU-Turkey Statement.

Mr. Mordue underlined that through the Facility for Refugees in Turkey, last year 1.5 million vulnerable refugees benefited from monthly cash transfers as part of the Emergency Social Safety Net created by the Facility and ensured 470,000 refugee children access to formal education through cash transfers support to their families.

Regarding the number of returns to Turkey of migrants arriving in Greece, DDG HOME Mordue said that the level of returns was low and that this is contributing to creating both a viable market for smugglers and a pull factor for future migrants. Accordingly, he suggested the EU should try to increase the level of returns.

The lifting of visa requirements for Turkish citizens going to EU countries depends on Turkey delivering on its part of the agreement that says it will readmit all migrants who illegally cross to Europe from Turkey, as well as the implementation of the 2013 “Visa Roadmap.” Ambassador Kaymakcı reminded that Turkey has already met 66 benchmarks out of 72 and believed that Turkey can accelerate its work on the remaining 6 benchmarks.

In regard to financial cooperation, Ambassador Kaymakcı pointed out a very common misunderstanding among the EU officials and the media regarding the EU’s financial contribution: the FRIT funds are not given to Turkey, but to organizations working directly with Syrians in Turkey.

Ambassador Kaymakcı underlined that the number of people returned from the Greek islands were around 1,900 out of around 60,000 people who were still able to go to the Greek islands since the implementation of the deal. In exchange, the EU has received more than 20,000 people, which goes beyond the 1:1 formula. However, as it was reminded by Ambassador Kaymakcı, these numbers are too small when compared to 3.6 million Syrians refugees and to an additional 1 million foreigners (including individuals from Afghanistan, Iraq, Bangladesh, Iran, Nigeria, Algeria and elsewhere in Asia) in Turkey. Kaymakcı also reminded that after two Turkish military operations in Syria, 320,000 Syrians were able to return to these areas in Syria in Afrin, in Jarablus, and in al-Bab.

Emphasizing that the first 3 billion Euro of FRIT funds has been completely allocated and programmed, Kaymakcı added that not all has been disbursed (roughly two-thirds have reached Syrians in Turkey so far). The second 3 billion Euro tranche has also been approved by the EU. Turkey (the Government, the Ministries, the NGOs, the Municipalities, etc.) has alone spent 37 billion USD since 2011, which represents a heavy cost for the country. Therefore, the Deputy Foreign Minister underlined that even though FRIT is probably the fastest flow of EU funds to any country, it should be accelerated further.

Ambassador Kaymakcı also highlighted the importance of the message given to refugees. The 1:1 deal gave a clear message to the Syrians not to go to the EU illegally as there will a legal way to do so. Accordingly, the Voluntary Humanitarian Admission Scheme should be accepted by the EU and by member states, as soon as possible to show Syrians the legal way.

The co-authors of the report Juliette Tolay, Assistant Professor of Political Science at Penn State Harrisburg and Laura Batalla Secretary General at the European Parliament Turkey Forum pointed out additional important findings of the report.

Juliette Tolay underlined that the situation is really unprecedented for Turkey, first, because of the number of refugees in Turkey, but also because Turkey has both the financial and organizational capabilities, as well as a strong political will to receive large numbers of Syrian refugees. While neighboring countries receiving large numbers of refugees usually lack financial or institutional capabilities, and Western countries with more capabilities have recently lacked political will to receive large numbers, Turkey has eschewed both issues. In addition, Turkey is demonstrating a form of reverse populism on the issue of migration compared to the EU. In the EU, the rise of right-wing populism puts constraints on the EU in its ability to welcome refugees. However, in Turkey, populism has meant that the government wants to demonstrate it is more responsible than the Europeans, and hence has pushed for liberalism in the field of migration and asylum. As such Turkey was able to demonstrate a liberal approach precisely because of a centralized political leadership that has been able to impose a welcoming approach towards refugees.

Laura Batalla explained why linking Turkey’s accession to the deal on migration was not a wise decision, as progress on this area has been almost non-existent. Back in the day when the deal was being negotiated, members of the EP-Turkey Forum warned about linking the two as they believed it would further undermine the credibility of EU’s enlargement policy. Batalla argued that the EU-Turkey Statement has transformed the nature of relations, turning it into a transactional model in which the EU and Turkey cooperate on shared common interests (i.e. counterterrorism, energy, trade and migration) putting aside value-based questions. Batalla also pointed out the fact that the success of the statement should not only be measured in terms of numbers but also in terms of its legality and implementation. Its legality continues to be challenged and its implementation has resulted in alleged human rights violations as documented by international NGOs. According to Batalla, this was never a crisis of numbers -maybe with the exception of 2015 when a large number of migrants came to Europe- but a crisis of morality and solidarity which put at stake EU’s core values. The response offered by Turkey was, in contrast, exemplary.

Speakers agreed that migration cooperation is one of the most successful areas of cooperation between Turkey and the EU, and the statement has had a positive impact on saving lives and breaking the chain of human smuggling. Many speakers expressed the importance of finding a quick solution to the Syrian crisis. The hope for a political roadmap and the creation of a constitutional committee in Syria to create a terror and conflict-free country where the refugees can go back, was expressed by several speakers and participants. Additional participants, however, raised concerns about premature returns where the security of Syrians could not be guaranteed, and highlighted the importance of continuing to focus on alternative durable solutions together with returns.