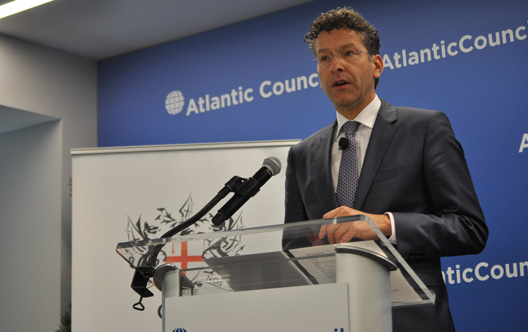 Thomson Reuters, the City of London Corporation, and the Atlantic Council hosted Eurogroup President Jeroen Dijsselbloem on Friday, October 10, for a public discussion about the challenges and opportunities of the eurozone reform agenda. “There are no simple solutions or quick fixes to major structural challenges,” Dijsselbloem said. Since the 2008-2009 financial crisis, the eurozone countries have struggled to implement reform agendas to stimulate sound growth, balance budgets, and stabilize troubled countries like Italy and Spain. Dijsselbloem argued that a mix of monetary and fiscal policies paired with structural changes of the banking system and smarter public investment are needed to help stimulate growth. However, Dijsselbloem stated that no amount of stimulus, either monetary or fiscal, could replace the political will needed to act quickly to jump start economic reforms that are often “unsavory to the electorate.”

The countries that have followed strict reform agendas, like Greece and the Baltic countries of the zone, have experienced hardship in the beginning but have now returned to growth. These kinds of fiscal and monetary reforms are therefore working to stimulate economies and get the eurozone back on track, but there is much work to be done. “The political and financial obstacles to reform are massive. We need to improve mechanisms so that policymakers can implement an ambitious reform agenda.This is vital for employment, consumption and investment in the short term, and for growth in the long run,” Dijsselbloem said.